Traversing the Storybeats of a Complete Story

What it means to transition through a narrative

Subtxt generates an impressive blueprint of the meaning of a narrative. Based on the Dramatica theory of story, the 336 Storybeats present in each Storyform help transmit the intended message, or Premise, of a work to the Audience.

As they reference structural elements of the model, Storybeats are often misunderstood as blocks of space within a narrative (Scenes or Sequences), when really they reference temporal aspects of the narrative.

Consider the difference between the Universe and the Cosmos. With the former, one appreciates one version, or uni-verse, by looking at what is known through space. With the latter, one experiences different versions of that same Universe. The Universe is one, the Cosmos is di-verse.

The Universe is understood through space, the Cosmos is explored temporally through time.

The di-versification of experience appears in the order of structural elements through time. In Greek, cosmos means order, or arrangement (kosmos). The arrangement of the one Universe differs throughout the Cosmos, granting different experiences or--different stories--for those who move through it.

The Storyform is a network of narrative meaning. It combines both the Universe and Cosmos of the Storymind into a singular experience. While the Thematic components of a Storyform will be the same in every story (Universe), the order in which they appear, or are arranged, will shift to accomodate the meaning of the story (Cosmos).

The following is a roadmap of the Cosmos of a Storyform found in Subtxt.

The Heart-beats of a Narrative

While apparently similar to collective understandings of "Acts" and "Scenes," the Storybeats of a narrative maintain a purpose other than simple organization of presentation. Storybeats define the scope and temporal transition by which each moment in narrative adds up to the overriding message.

This transitory quality of the Storybeat requires a division of narrative more closely aligned with time.

A story is a Moment in time for the Storymind.

As a Moment is transitory, by definition we can appreciate more about this Moment by exploring aspects of transition.

A Single Transit of a Complete Story

From top to bottom, a narrative consists of:

One Throughline of a Moment

The difference between the bottom and two is meant to be illusory: one Event is also a Moment in time...but that is another story.

The Four Throughline Perspectives of a Complete Story 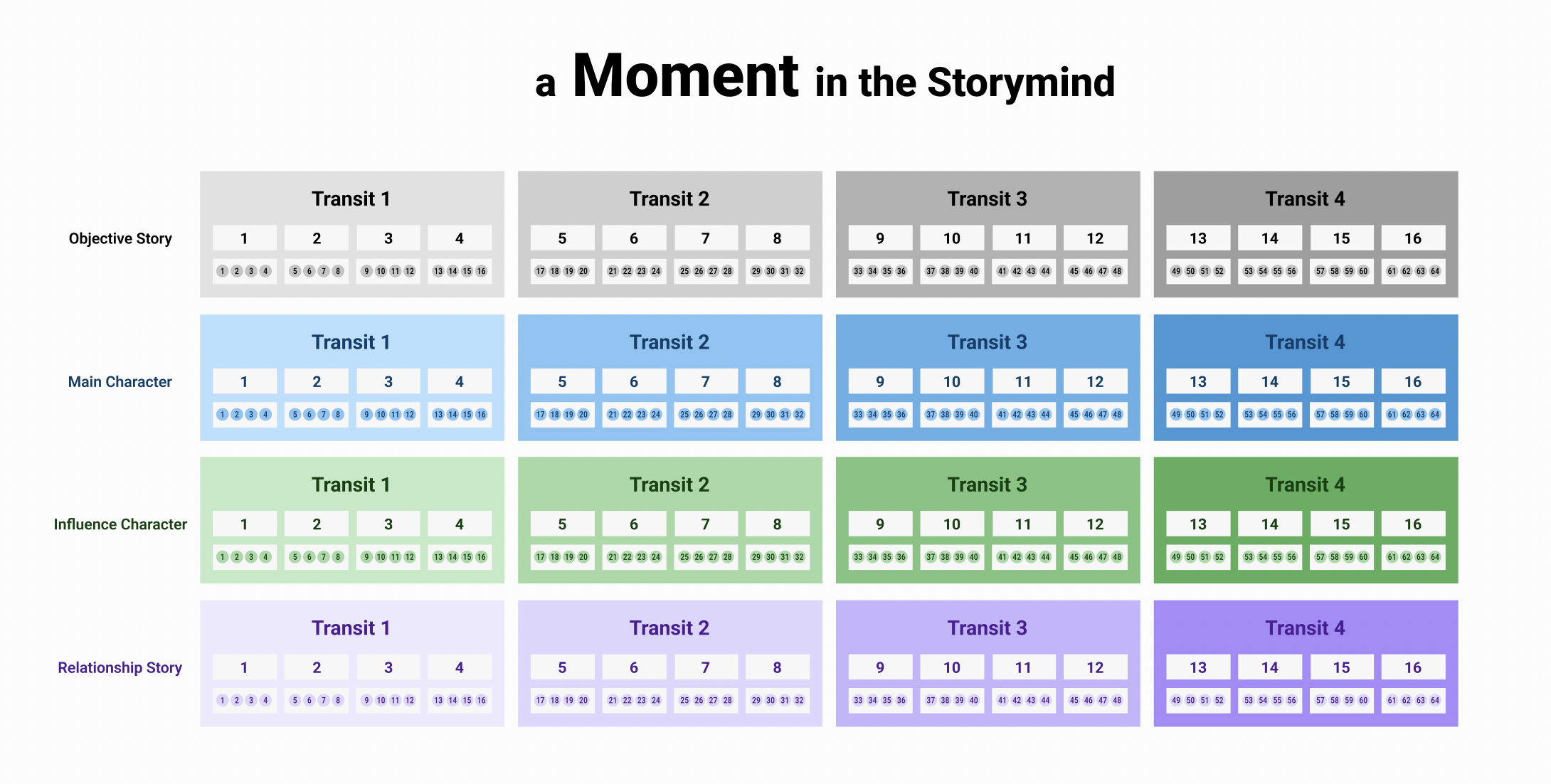 A Moment in the Storymind

Think of a Storybeat like the heartbeat of a narrative, each thumping away at the meaning of the story.

While apparently similar in terms of scope and position, Transits are not Acts. Progressions are not Scenes. And Events are not the Beats of a Scene. Acts, Sequences, Scenes, and Scene Beats are elements of Storytelling, an area of communication that is separate from narrative structure (Storyforming). A single Act may consist of two Transits (Transit 2 and 3 are typically thought of as “Act II”). A single Scene may consist of several Progressions, a Transit, and even several different Events, all from different Throughlines.

The tendency at the beginning of a story for Progressions of a Throughline is for each to secure its own separate Scene in the Storytelling. As the story progresses to the end, these Progressions wind tighter and tighter together until finally, in the 4th and final Transit, one may find Progressions from all Four Throughlines in the same physical “Scene.”

This is why the Fourth Transit of a Throughline typically runs quicker than the First.

These Storybeats are arranged in 84 quads: 4 Transit quads, 16 Progression quads and 64 Event quads.

A single Event means nothing on its own; only within the context of the quad (with the other three Events) does the Event then take on an appreciable meaning.

The same can be said of Transits and Progressions--they only hold meaningful value when seen in context of a quad of four transitions (a temporal quad). 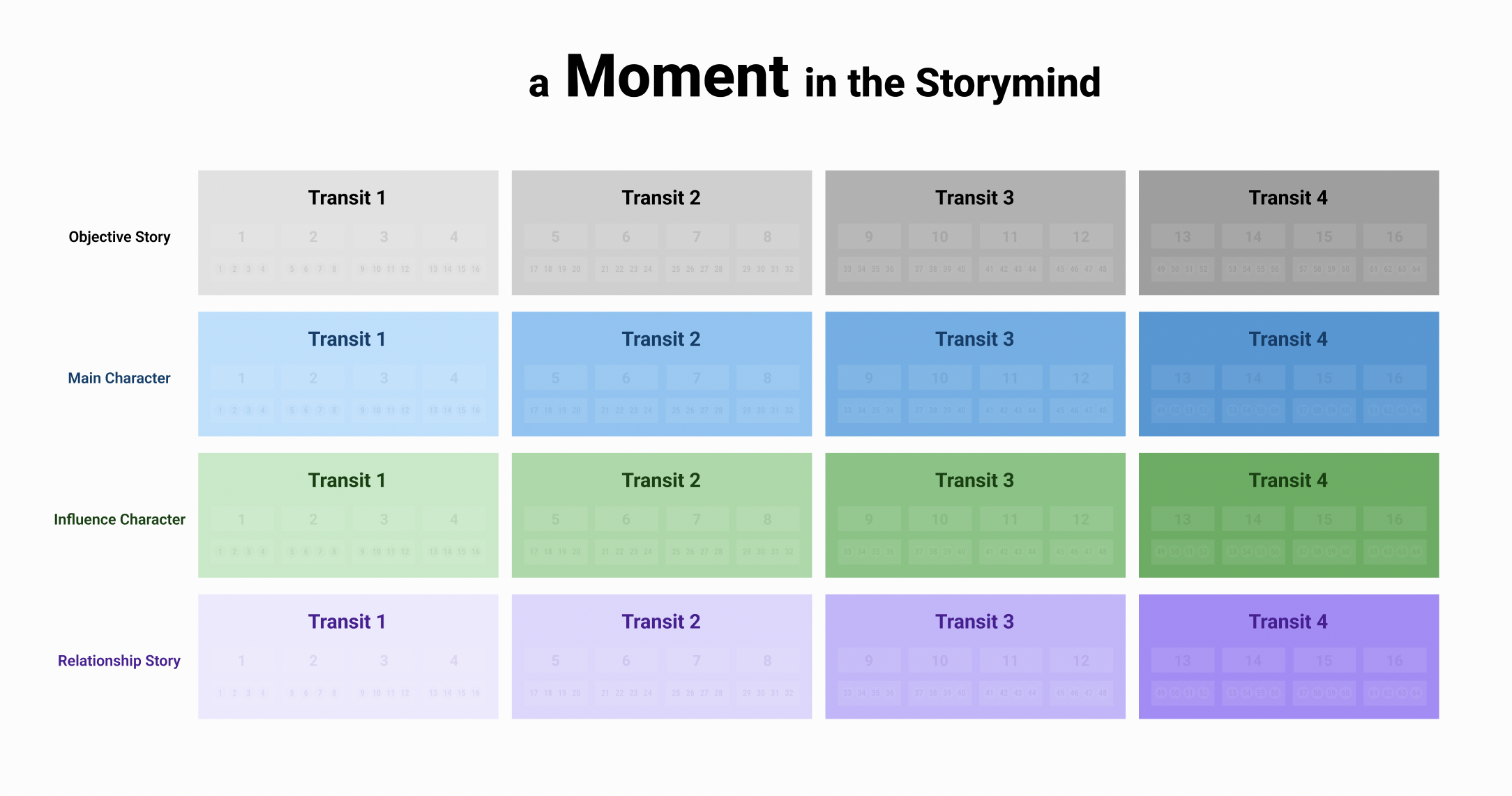 The 16 Transits for a Complete Story

At the very minimum, a complete story is a story where the 4 Transit quads are completely explored: 4 Transits of all 4 Throughlines illustrated and present in the story.

Theoretically, a story can be considered complete with these 16 Storybeats.

The Structure of Propaganda - Missing Transit

A story with one missing Transit is technically incomplete—yet, can still be somewhat meaningful to an Audience.

When 3 items within a quad are present and the 4th is missing, the Audience will naturally fill in the blank with their own appreciation of what is needed to complete the story. This is the basis of all propaganda (good or bad): the Author tells just enough of a story that the Audience is compelled to fill in the blanks what is needed (thinking they themselves came to that understanding on their own, when really—the Author manipulated them into doing that).

Moonlight and Encanto are both examples of films that use propaganda (consciously or unconsciously) to make the Audience an active part of the storytelling. In Encanto, the final Transit of the Objective Story Plot is missing—leaving the Audience to fill in the blank with their own methods for putting back together the pieces of their respective families. In Moonlight, the 3rd Transit of all Four Throughlines is missing—leaving the Audience to fill in the blanks for what happened in-between juvenile detention and adult life.

Propaganda not withstanding, most Authors seek to communicate a complete story—meaning, at the very least, all four Transits of all four Throughlines need to be present.

A Complete Story with Some Progressions

Transits can be further explored by illustrating the Progressions of each Transit. As with the Transit, an entire quad of Progressions needs to be illustrated (all four items) in order for a Progression to be meaningful to the Audience.

The story is above is still considered to be complete because, at the very minimum, all four Throughlines have been explored.

There is no purpose, or beneficial result, in exploring a Transit in greater detail EXCEPT when it comes to filling out the space of a particular work. In other words, 16 Transits is usually sufficient for a 40-50 min. episode of television or a novella. When you expand the space to the size of a feature-length movie or a novel, it can be less effective to hit upon the same Transit over and over again until the next one. It would be akin to saying the same thing over and over again, without going into detail as to WHY you continue to explore a particular Transit.

With more time spent, engagement suggests an ability to explore the four “transitions” of a Transit in order to gain the same kind of appreciable meaning found when looking at a story in terms of the four Transits of the four Throughlines.

A Complete Story with All Transits and Progressions

Here, all 64 Progressions have been illustrated, completing the maximum of 16 Progression quads that a complete story can explore.

A Complete Story with All Transits, Progressions, and Events

The Author can go into even greater detail by exploring the Events within a Progression. These 256 Events complete the maximum of 64 Events per Throughline.

In the above theoretical “perfectly complete story,” all 84 quads have been explored. This is the entirety of the mind of an Audience member can take without losing sight of the entire story. The above is what is known as the Size of Mind Constant.

Any more detail would be another story (and is frequently what is found in episodic television).

While do-able within the context of a long-form novel, a typical 2 hour movie would find it incredibly difficult to explore all 336 Storybeats (as it would require a minimum of 20 seconds per Storybeat).

An Incomplete Story with Various Progressions and Events

In the above example, both Progressions and Events are present to the exclusion of their contextual Transits.

This would be an example of an incomplete story, as the Storybeats within each Transit only hold appreciable meaning in their relationship to their parent elements. Without the parent element of a Transit (or in the case of the Relationship Story Throughline, the Progressions and Transits), the greater detail is meaningless.

A Complete Story with a Typical Arrangement for Most Feature Films

The example above can be considered a complete story (and is representative of the structure of many films). While inconsistent in its presentation of Progressions and Events, all 4 Transits of all 4 Throughlines are present—guaranteeing a meaningful experience.

In total, 60 quads are completely explored: 4 Transit quads, 13 Progression quads, and 32 Event quads. 24 are left off.

A Broken Story with One Incomplete Throughline

The above example is incomplete.

The above is similar to Dreamworks’ Kung Fu Panda 2, wherein the Relationship Story Throughline exists only for the first half of the film (Transits 1 and 2), leaving the Audience confused and somewhat disappointed as to the lack of development in the key relationship between Po and Tigress.

A Complete Story with a Detailed Ending

The above example is theoretically complete, yet somewhat absurd.

Typically, you would find this order reversed—where there is more time spent in setting up the potential early on in a story (First Transit), and leaving the exploration of Thematic issues in the end to broader strokes, as less detail is required.

While one could structure a narrative like this, the end result would more than likely grant the Audience a sensation of “When will this be over?” During the Fourth Transit, a less than desirable outcome...

...UNLESS the above Storyform was representative of an entire series of television (my thanks to writer Mike Lucas for pointing this out). If you consider each Transit above as a single season of television, then you could conceivably have the first three seasons explore the broader thematic conflicts of the series. And then with the final season (the 4th Transit above), the writers could dive into the specifics.

The result would be that the 4th season would come across as more introspective, and perhaps more sophisticated, then the first three seasons.

My thanks to Nicolas Le Du for the original version of these images.

Previous ←
On Being a Story Consultant
→ Next
Using Artificial Intelligence as a Co-writer, Not a Parlor Trick