Finding the Source of Conflict in Your Story

Reconciling your efforts with purpose and direction

The most challenging thing about writing a story is making choices. You can't write everything in your head and hope it all works out in the end. Our minds are notoriously bad storytellers; the feature that makes it possible for us to thrive and survive (shifting contexts) is the bug in the storytelling process. We need to be conscious that the story in our head is impossible to get down on the page.

We need to make choices.

The Dramatica theory of story makes this a simple task. Dramatica refuses to allow you to construct a story with shifting contexts and forces you to decide what story you want to tell. We split our stories into four distinct Throughlines—four different contexts—and keep them consistent from beginning to end. 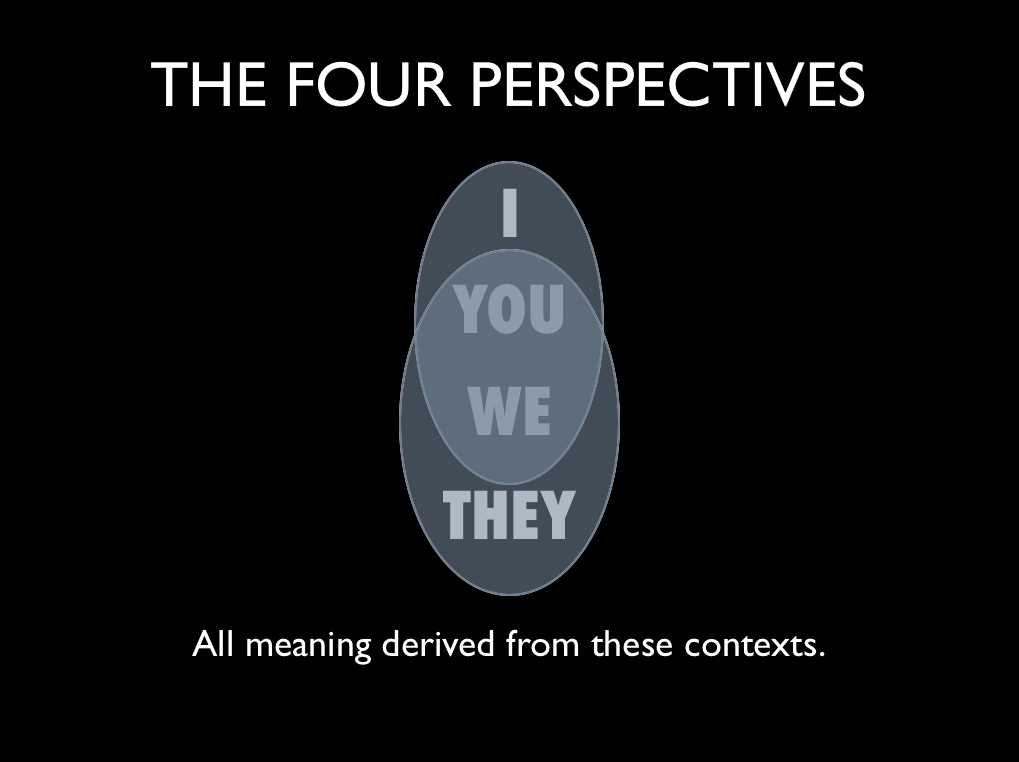 These four Perspectives match up with the Four Throughlines of every complete story:

In the past, the recommendation was to identify the source of conflict in each Throughline. Look to the cause and label it as a "Situation", an "Activity", a "Fixed Attitude", or a "Manner of Thinking"—as if the conflict in a Throughline can only be one of these things.

The endless round table discussions and infinitely scrollable posts reveal this approach inadequate. If we shift context at a moment's notice, how can we settle on one to determine conflict? Even worse, if one man's trash is another man's treasure, how can we ever see eye-to-eye on the "true" source of conflict?

The Act of Reconciling Story Structure

One of the perks of developing an application for writers and blogging about narrative theory is working with prolific and massively talented authors. Novelist Sebastien de Castell is one of those perks. Beyond providing insight into my lousy UI design choices, working with Sebastien gives me the rare opportunity to look inside the working author's mind.

Sebastien and I have a history of not agreeing on Storyforms for particular narratives. Captain America: Civil War and The Dark Knight Rises are two examples of our inability to eye-to-eye on why these stories work. These are healthy and productive arguments—but arguments nonetheless—and they always center around identifying the "true" source of conflict.

Truth being subjective, they never resolve.

I will say Civil War's source of conflict is the Activity of punching, kicking, and fighting—the essence of the superhero genre. Sebastien will say it's the Fixed Attitude of doing what is right, even when it's wrong. Both of us are right, but both can't be right for the narrative structure to maintain integrity. Context is meaning. Shift the context, and you shift the meaning—thus, no purpose without a singular context.

The trick lies in witnessing all Four Throughline perspectives at once. One can argue the presence of any one source of conflict for a single point-of-view. Try and do all four at once, and you quickly eliminate many of your options. Yet, you can run into the problem where my storyform is more accurate than your storyform.

The Practice of Setting Context

On a recent call developing one of Sebastien's next novels, we figured it out. While an author might sense the source of conflict in all four areas, he must reconcile himself to write about one area of conflict for this story. It's not about where conflict comes from, but what you want to explore in your story.

This approach might be more appropriate for something like a novel where a character does not exist save for the words on the page—but applied to other mediums, and clarity rolls onto the scene. In The Shawshank Redemption, Red's source of conflict may be his cynical attitude or his incarceration at a young age. Yet, Darabont reconciles himself to show on-screen the dysfunctional Psychology (Way of Thinking) Red employs during his hearings. "Yes, sir" and "No, sir" punctuate his every line.

Red in The Shawshank Redemption

Same with The Sixth Sense. Malcolm may be dead, yet we never spend time what exploring it's like to physically be on the other side. Shyamalan doesn't focus on Malcom's Universe (his Situation); he zeroes in on what it is like not knowing you are dead. That's a problematic state of Mind (Fixed Attitude).

Malcolm in The Sixth Sense

Both Shyamalan and Darabont (and King, by extension) wrote of characters rich in all four dimensions, yet they centered each of their stories on one specific area. They reconciled themselves to choosing one Domain and stuck with it for the duration.

When it comes to a practical application of the Dramatica theory of story, identifying an area of exploration works better than finding a conflict source. True, the theory hinges on the location of genesis to generate structure—but working authors are not narrative theorists. They want to write, not argue incessantly over the difference between what we think and how we think.

Reconcile yourself to one Domain per Throughline and stick with it until the end. Adorn it with other areas, sampling what is needed to capture the vision of the character in your head thoroughly—yet, always return to this one area.

Think of it as the source—a source of writing, rather than one of conflict. Doing so secures the integrity of your narrative, with the added benefit of maintaining your creative flow.

Previous ←
Time and Space in Dramatica: Rewriting the Story Limit
→ Next
The Mathematical Balance Between Logic and Emotion