In Hollywood, every film is a Three Act structure. Roam the halls of the story department at one of the big animation studios or saunter in to a lunch meeting for production executives on a live-action film and you encounter the same sight on every white board: a sequence of events broken down into three separate sections.

But not every story is a Three Act structure.

Some narratives tell the story of a rise to power followed by a great fall (The Dark Knight); others start with the fall, then end with the rise (The Matrix). These stories split dramatic tension into Two Acts. Any attempt to force them into a Three Act structure only encourages dissension and disagreement among collaborators.

Still others--like The Godfather or Platoon--break off into four distinct movements. Almost episodic in nature, yet still tied together thematically at the core, these stories clearly function on top of a Four Act structure. Force a Three Act paradigm here and you risk breaking a masterpiece.

The key to effortless development dwells in understanding the type of narrative structure your particular story requires. Every complete story feels complete because it addresses the different contexts where problems find solutions. Each Throughline focuses on one particular area of conflict, and each of these areas divides naturally into four different Types of Conflict.

Problems of Activities split off into Understanding problems, Doing problems, Learning problems, and Obtaining problems. Chris Huntley, one of the co-creators of the Dramatica theory of story, describes the difference between these four Types in the Dramatica Users Group narrative analysis of Zootopia at the 1:21:40 mark in this video:

As Chris explains, Doing is about engaging or not engaging in an activity whereas Obtaining is about achievement or loss. Both require "doing" but the focus in each instance is different. Understanding is figuring out how things are related to one another whereas Learning is the process of learning about something.

Again, focus is key. Some enjoy reading, while others want to read all of the books in a series and perhaps own the largest library in the world. The former focus on the Doing, the latter on Obtaining. Think of these different Types of Conflict as different dimensions of the area of conflict they explore; in this case, Doing, Obtaining, Learning, and Understanding reflect different dimensions of an activity.

The Natural Progression of A Story

With four Types of Conflict in each Throughline, The Reason for Acts becomes clear:

They signify the change in dramatic focus the characters take in order to solve the problems within a story.

Stories don't naturally separate into four parts because they need a beginning, a middle, and an end. They don't break down into fours because of Syd Field's Plot Points and Midpoints. And they certainly don't divide up into four movements because film reels were only 10-15 minutes long.2

Stories break into four parts in order to completely evaluate the four different Types of Conflict in each Throughline.

The characters may explore problems of Activities by Doing first, then Obtaining, then trying to Learning, and finally working to make others Understand. This is what happens in The Matrix:

In another story, the characters may try Understanding first and when that doesn't work switch to Learning. With no solution in sight, they try Doing and eventually find resolution with Obtaining. This is what happens in Unforgiven:

Both films, miles apart in terms of storytelling, focus their attention on the same kind of conflict: Activities. The sequencing of the types differs, but the feeling of completeness exists in both. The characters exhaust every potential resource in their drive to find a solution to their problems.

The Feeling of the Act Order

What about a film where they start off focusing their attempts to find resolution by Learning? Having exhausted that area, they then move into Doing something which eventually leads to Obtaining--but still, no resolution. It is only once they move into Understanding that they find a solution.

This is what happens in Collateral:

Note the difference in feeling here between the Act order of Collateral and that of The Matrix or Unforgiven. The dramatic tension for the first two is clearly a rise-fall situation: rise-fall for Eastwood and friends, fall-rise for Keanu and pals.

Collateral on the other hand features three distinct movements. The preparations for the grand jury (and the efforts to keep the witnesses permanently quiet); the assassinations; and the effort to save Annie (and end Vincent).

The last movement shares the same subject matter as the second one--preventing or engaging in a murder--yet feels distinctly different. Why is that?

And why does the Act order of The Matrix or Unforgiven clearly feel like only two movements?

The Meaning Behind Act Order

Doing and Obtaining feel the same. Ask anyone unfamiliar with Dramatica to explain the difference between the two and most find it difficult, if not downright challenging to answer. Same with Understanding and Learning (or more precisely, Learning). Where does Learning stop and Understanding begin?

When shifting into a type of conflict that feels the same, the sense in the Audience is that this is a continuation of exploration. The delineator between the two is hard to find. Act turns feel like major turning points because they represent a shift into a decidedly different dimension of conflict. The shift from Obtaining to Understanding grabs your attention because of the differential between the two. Same with Learning into Doing.

In the 10th anniversary edition of The Dramatica Theory of Story, Huntley coined this shift a "Bump" or a "Slide". Bumps represent vastly different dimensions, while Slides refer to similar concerns. 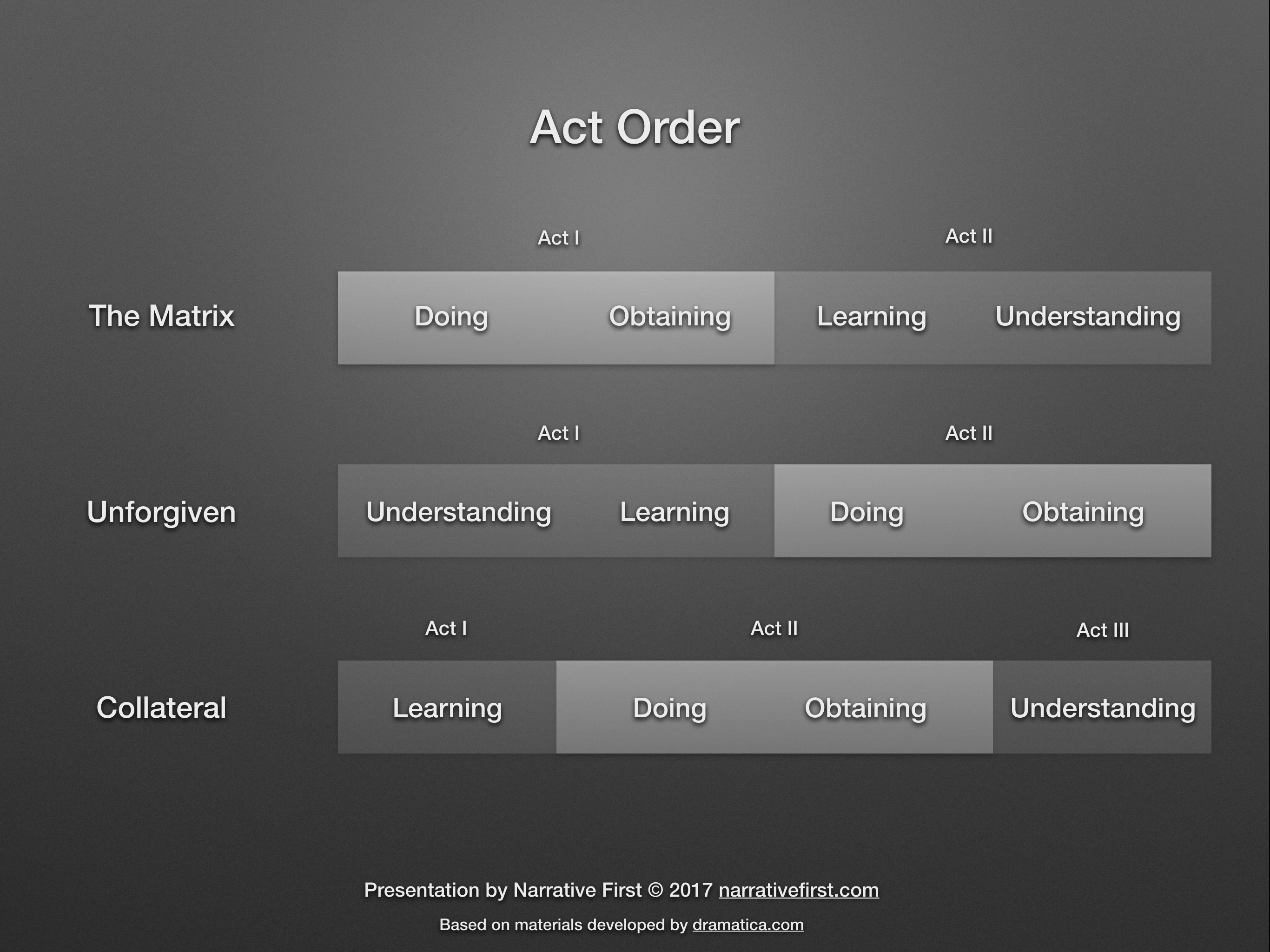 In sharp contrast, the first half of Collateral moves from Learning to Doing--a clear distinction between dimensions of conflict. We know when Learning stops and Doing begins. That body smashes down on the roof of Max's cab and we are off for the entirety of what is traditionally known as the Second Act.

The second half moves from Obtaining to Understanding. Again, another clear marker between the two. Max gets wind that Annie is next and no longer do we focus on achieving--we put all efforts into getting her to understand the severity of her situation.

Three acts. Two acts. Four. Why does any of it matter?

When it comes to deciphering questions of dramatic tension, trying to graft a traditional Three Act understanding on to what is clearly Two Act structure results in confusion, distraction, and a complete waste of the writer's resources.

If you were to write Unforgiven and felt yourself struggling to answer the question of dramatic tension in "Act Two", you might convince yourself of the need to graft an incongruent point-of-view onto your story. This one mistake could potentially set you back weeks--if not months--into a series of pointless rewrites trying to determine the essence of your story. Structuring a narrative without considering the underlying Types of Conflict and dynamic forces at play results in disastrous consequences.

Thankfully the Dramatica theory of story, and the application that supports its findings--Dramatica Story Expert--make it easy for writers to determine the number of Acts in their story. Once you dial in your storyform, look to the four Signposts in your Objective Story Throughline and take note of the order.

In next week's article we will take a look at using this understanding to help you determine the thematic makeup of dramatic tension in each Act.