Identifying Types of Plot in a Story

Understanding the relationship between Plot-level Concerns

The top level of the Dramatica Table of Story Elements emphasizes Genre. By juxtaposing a set of objective sources of conflict against another set of subjective sources, the Author creates a personality for the Audience to inherit. Genres and Sub-genres develop from this unique narrative ID. 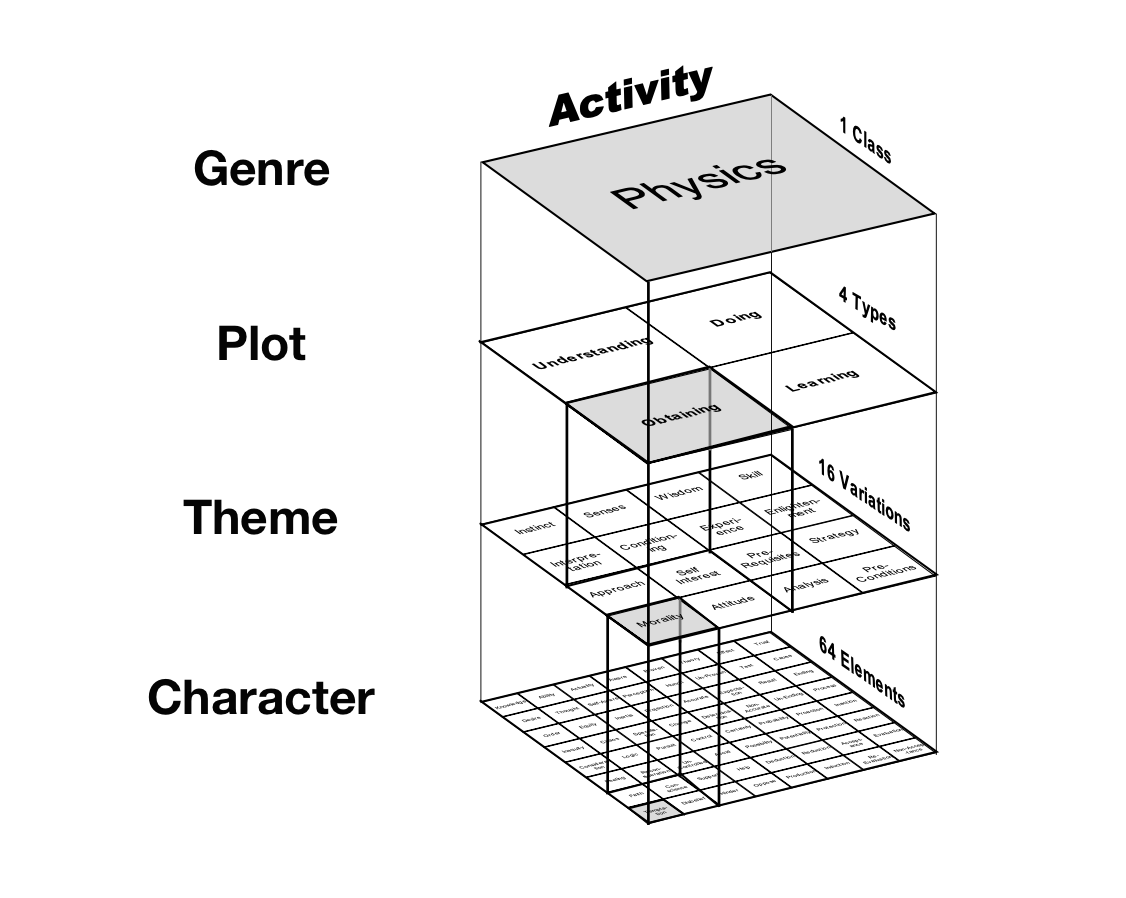 The next level down more closely associates itself with Plot, centralizing the narrative discussion on a set of concerns common across all Four Throughlines.

The vital aspect of this cross-perspective relationship is the requirement that all Plot-level Concerns remain in the same relative location. In other words, if one Throughline explores a Concern in the Upper Left quadrant, all Throughlines must follow suit and explore Upper Left Concerns in their respective areas.

This is the key to a thematically consistent story. Narratives break-down when they attempt to mix and match concerns across different perspectives. It is imperative that both objective and subjective conflict meet somewhere at the bottom of the model. If they don't, the story loses all meaning.

As mentioned in Understanding the Personal Goal of Your Main Character:

Shifting context on the reader without altering the structure of a narrative only confuses and confounds them. If you are going to make an argument, then please do so concretely is all an Audience asks of an Author. Keep your story consistent and they sit riveted through the whole thing.

The Flavors of Different Plot Concerns

This grouping of Concerns across 16 different Types of Plot results in four general sets:

And while these four sets will be "flavored" and tempered by the personality above, a general understanding of the type of story arises from their combination:

Many writers find themselves drawn to the same type of narrative. Christopher Nolan prefers the upper left (The Prestige, Inception, Memento, Batman Begins, and The Dark Knight Rises). Aaron Sorkin trends towards the bottom right (The Social Network and A Few Good Men). There is no "right" answer, only the answer that feels right to you and your story.

A History of Concern

The cultural zeitgeist trends towards a different set of Concerns every 20 years or so. We are currently in the midst of a Lower Right trend (2010-2030) coinciding with the release of the iPhone and ubiquitous connection to information (Concerns of Learning, Present, Consciousness, and Conceiving continue to pop up). As mentioned in this analysis of Brief Encounter:

This apparent cultural progress through the Table of Story Elements appears to confirm the Strauss-Howe generational theory of the Four Turnings:

Each generational persona unleashes a new era (called a turning) lasting around 20–22 years, in which a new social, political, and economic climate exists. They are part of a larger cyclical "saeculum" (a long human life, which usually spans between 80 and 90 years, although some saecula have lasted longer).

As the Dramatica model acts as an analogy to a single human mind confronting an inequity, a saecula could simply be the cycle of four narratives within the context of an individual mind. It could also be that Strauss-Howe merely conflated generational turnings with the natural Act order when given the story of one person.

The Reason for the Feelin'

The Dramatica Table of Story Elements is a representation of Quad theory, a series of cascading fractal relationships approximating the internal "universe" of a single human mind. 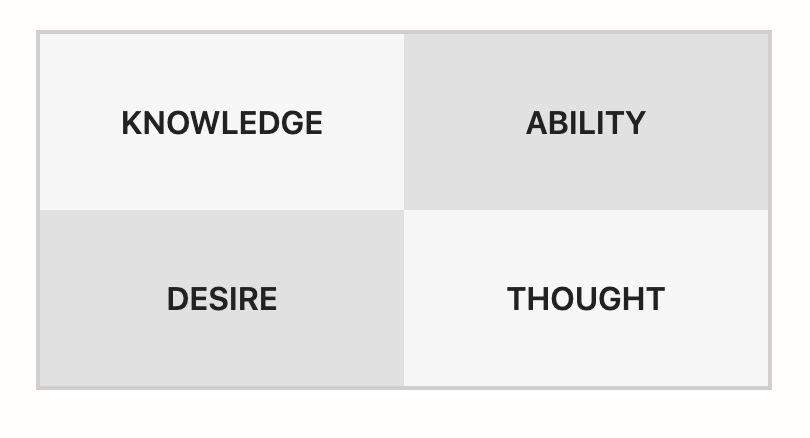 These four base Elements of Knowledge, Thought, Ability, and Desire operate as the foundational quad for the entire model. They coincide with the more commonly understood external Elements of Mass, Energy, Space, and Time.

And the cycle continues…

This relationship between Elements explains why certain types of narratives feel the way they do within a story. Upper-left Knowledge stories feel heavy and dreadfully serious because of their emphasis on the Mass of the mind. Lower-right Thought stories bounce energetically from one scene to the next, raising the consciousness of those engaged with the narrative. Upper-right Ability stories compare and contrast talents in an attempt to show-off, while lower-left Desire stories simply conflict down to a simple act of appeasing motivation.

Finding the Unique Set of Concerns

Identifying the right set of four requires intuiting this sense of Knowledge, Thought, Ability, and Desire, along with the grander understanding of your story's Genre and Sub-genre. The contrast between personality and focus generates a set of thematic elements common too many films. Courtroom Dramas drop into the lower right, juxtaposing an objective view of the Mind with a subjective perspective on Psychology. Marvel Comic Book movies prefer the subjective view in Universe and the objective view in Physics.

The very best way to develop this ability to intuit narrative structure is to walk yourself around the Dramatica Table of Story Elements. Find a set of two or three films within a similar Genre and Type-level Concerns and feel your way into theme.

For more on this approach, consider enrolling in the Dramatica Mentorship Program. A significant part of the curriculum involves this process of moving from one set to the next in an effort to better understand story.