Writing a Scene with Subtxt

Defining the elements at play beneath the surface

Meaningful story structure accounts for the storyteller. If our understanding of psychology is correct and we see who we are, then a productive model of organized thought (structure) must consider the observer. Subtxt's latest approach to organizing narrative adheres to this line of thinking.

Open a narrative Method like Self-interest or Truth in Subtxt, and observe the set of four additional Methods located at the top of each page. For Self Interest, you find Pursuit, Control, Free, and Avoid. Truth contains Knowledge, Actuality, Perception, and Thought. 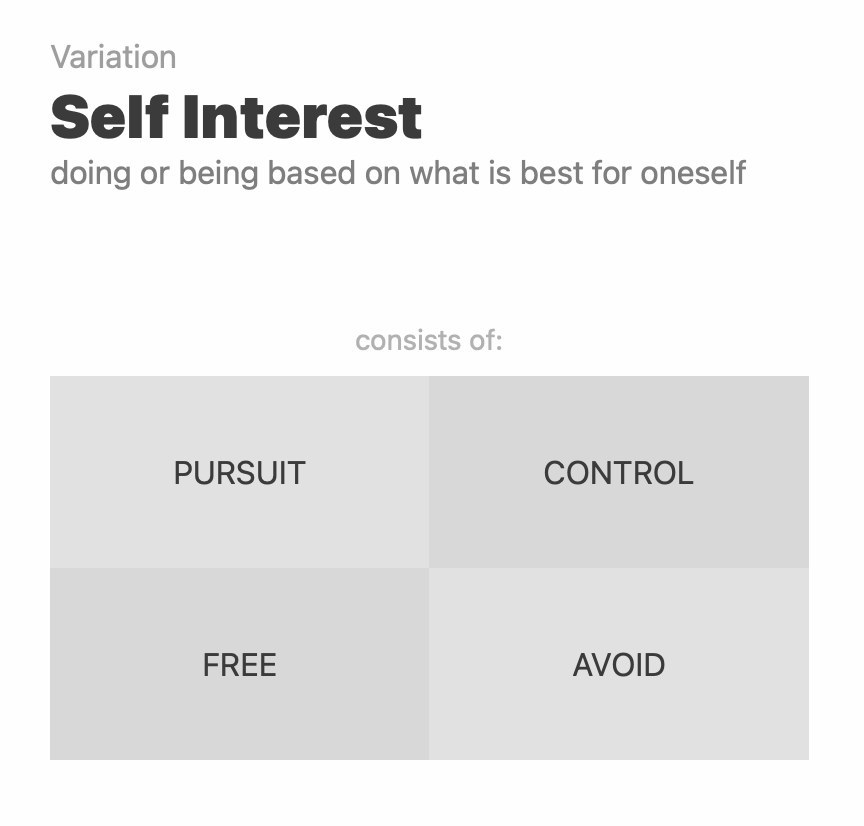 These four “children” Methods tell the story of their “parent” Method. When writing about Self Interest, you’ll want to cover Pursuing and Avoiding, as well as Controlling and Freeing. Same with Truth: you’ll want to write about what is Actually there and what people Perceive to be true (as well as what they Know and what they Think).

While single words, these Narrative Methods offer a wide gamut of interpretations for your scenes. Avoiding can be too much avoiding, as well as not enough avoidance. A lack of Perception is just as functional as too much Perception.

In an effort to help writers brainstorm as many different interpretations of these Methods as possible—while maintaining the integrity of their essential meaning—Subtxt offers a curated catalogue of Method Illustrations. You’ll find the complete list of available Illustrations for each Method further down the page.1 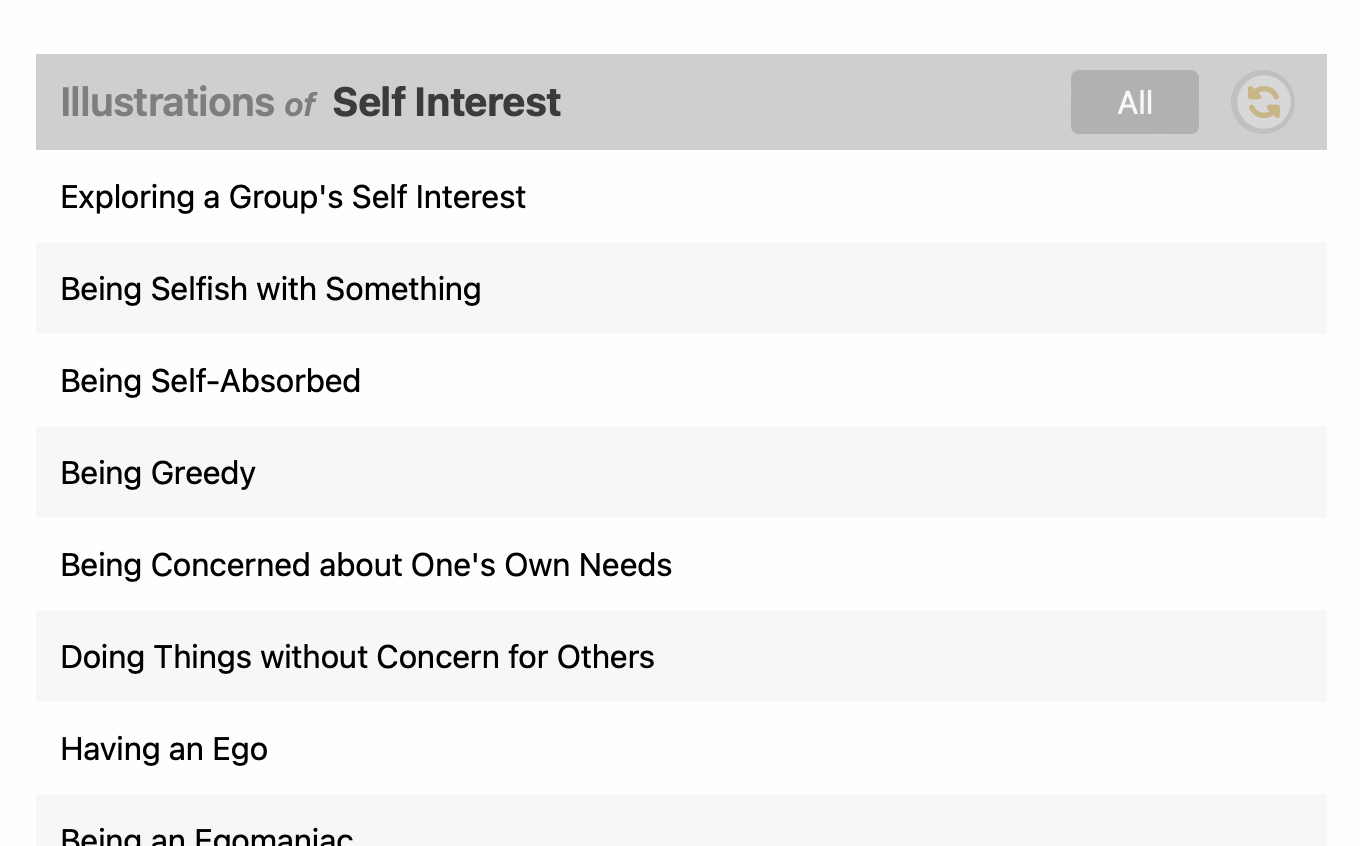 Scroll down to the InstantScene component on the Self Interest page. Here you find a list of four Atomic Beats that tell the story of the Method in question. 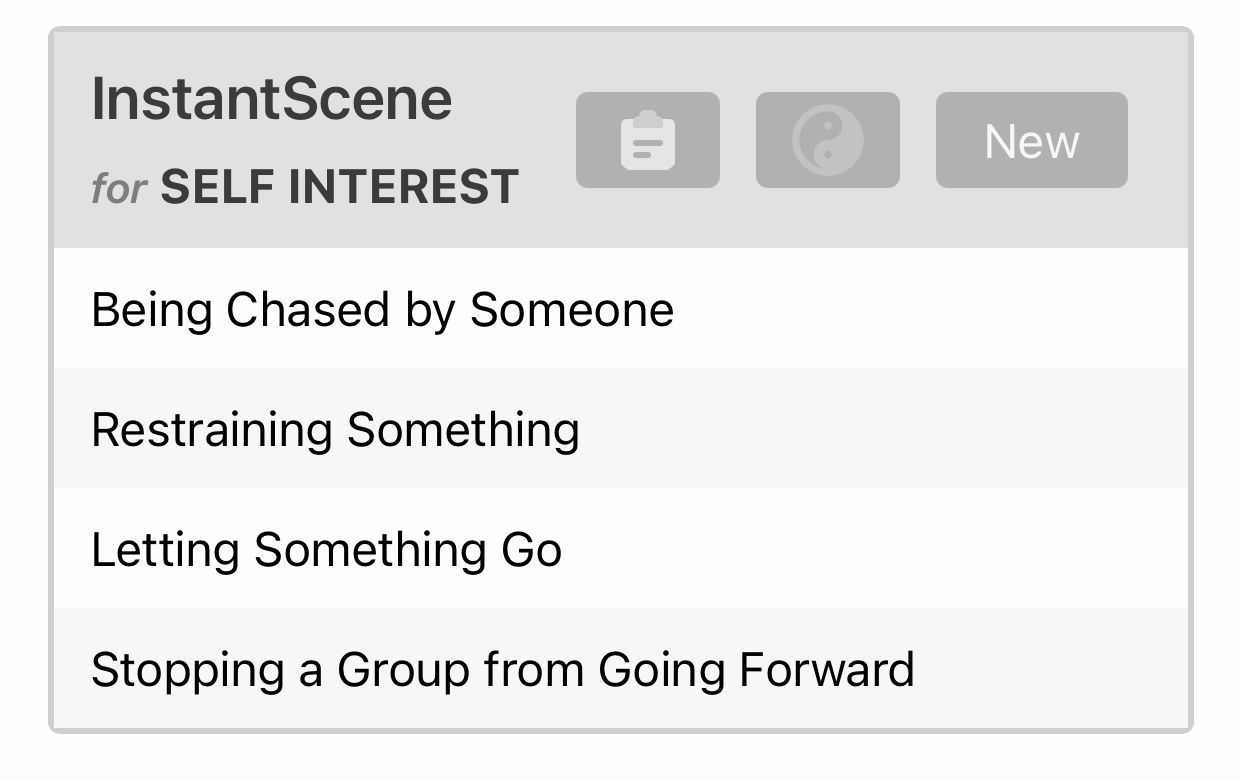 For a scene about Self Interest, Subtxt suggests:

Being chased by someone is a method of pursuing (Pursuit). Restraining something is a method of controlling (Control). Letting Something Go is a method of freeing (Free), and Stopping a Group from Going Forward is a method of avoiding/preventing (Avoid). If you were writing a short story, or a basic pitch, you could take these four Beats as a template for what happens in that scene—and the subtext would be about a method of Self Interest.

For example: On the road from Mississippi to California, a gold-rush caravan finds itself chased by marauders. Led by experienced riders, the caravan restrains anyone from falling out of line—making it easier for the marauders to pick them off one by one. Sensing their numbers dropping and their livelihoods in danger, a faction of the caravan splits off and heads for the hills-letting go of their gold rush aspirations. Undercover of higher ground, the faction stops the marauders from getting closer, and watches as those who stayed in line perish.

A scene about Truth would find Subtxt making this suggestion: An astrophysicist finds himself up late at night fighting Flat-earthwrs on Twitter. The realization that these “kooks” and their pleasant joyful lives embody the principle of Ignorance is Bliss only stokes the fire of his ire. But as a man of science, he can’t deny the primal search for truth, a search that brought his colleagues to question the truth behind Einstein’s theory of general relativity—especially after the recent visualization of dark matter throughout the universe. Recognizing the majority of his compatriots refusing to go against Einstein and keeping up the appearance that their life’s work is correct—the astrophysicist begins to investigate the irrelevant details of a “firmament” and other such laughable ideas present in the flat community.

While a bit lengthy (and in need of a rewrite) the four Beats above string together to paint the picture of one man struggling with Truth.

Tap or click the button marked "New" and Subtxt generates a brand new scene for you that maintains the integrity of the current thematic focus (either Self Interest or Truth in these examples), while offering different illustrations of the specific Methods. 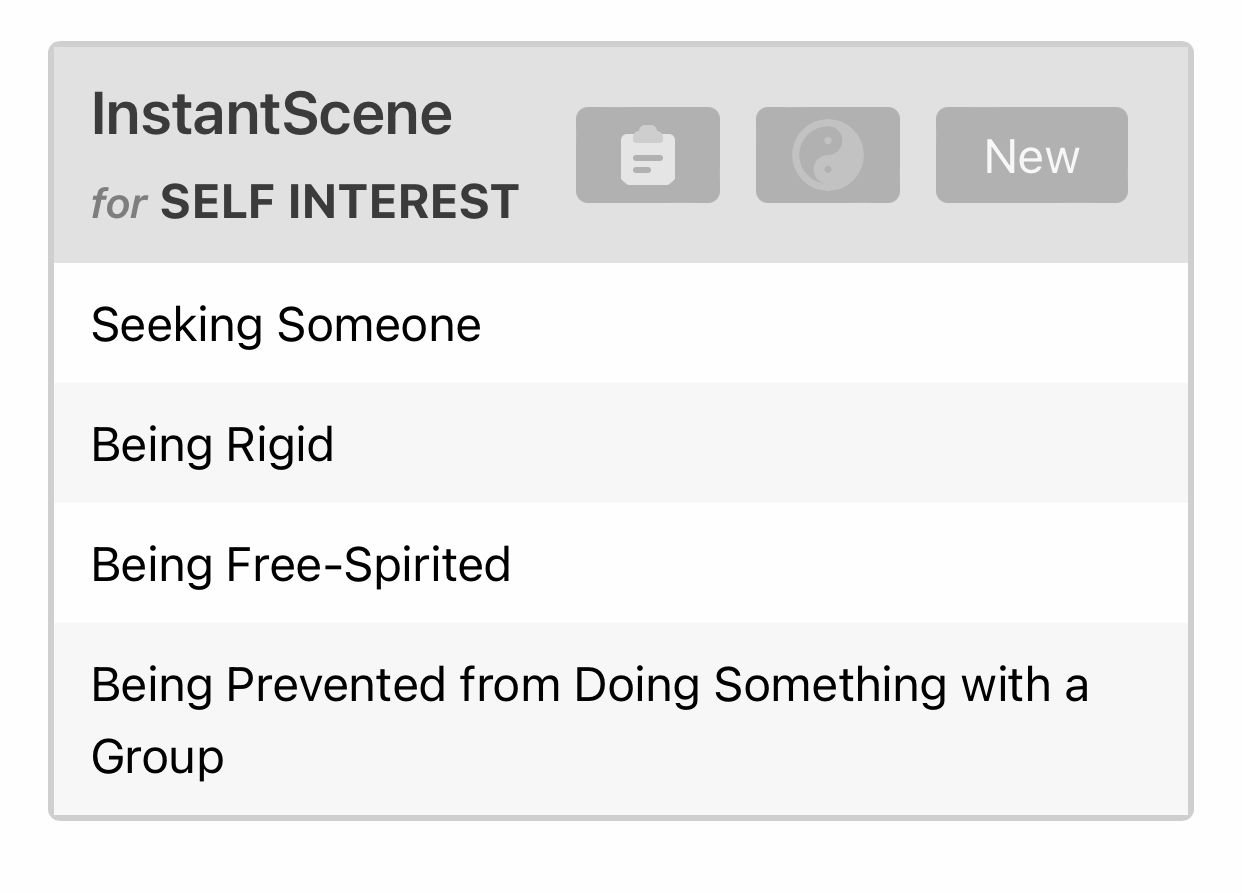 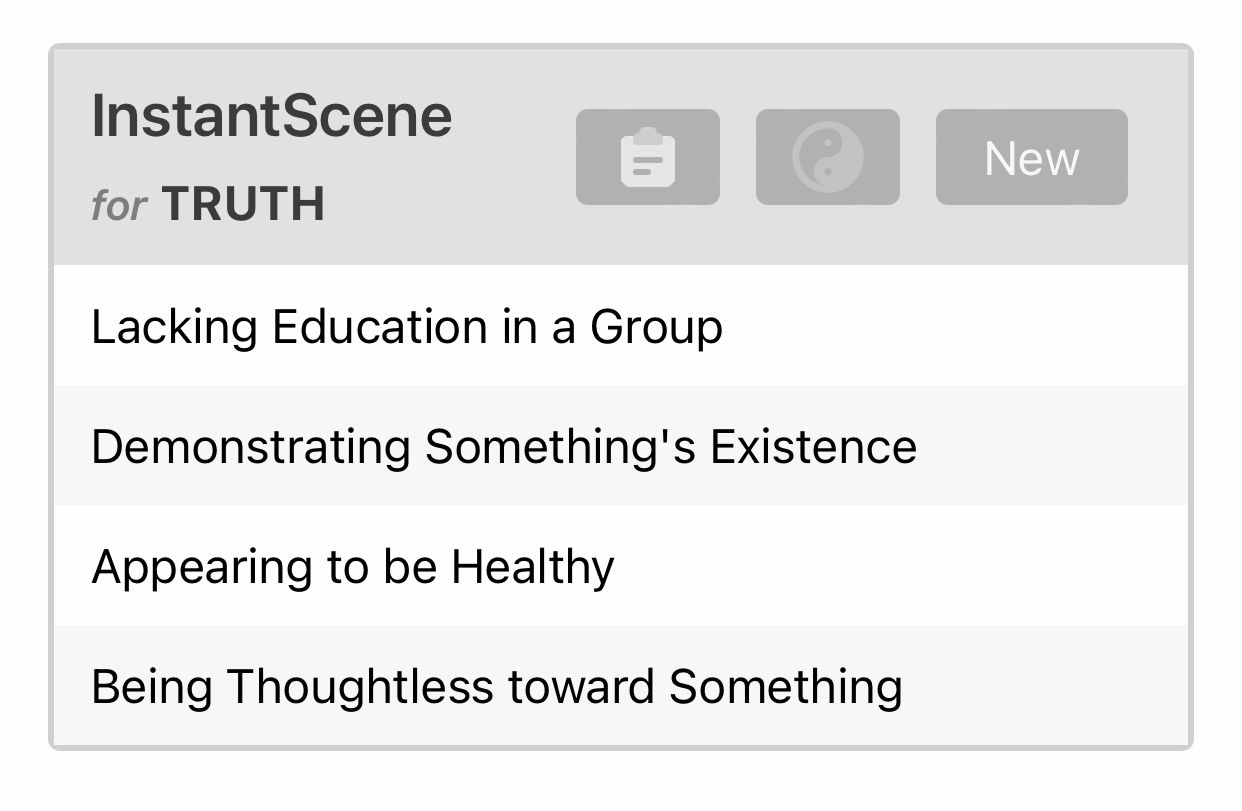 Note how these new scenes inspire a new direction--yet, maintain the basic structure of the previous examples. This consistency is what it means to distinguish the subtext of a scene from the surface-level storytelling.

And while this ability to quickly generate new ideas while maintainingg structure is certainly a strong-point of Subtxt, the real magic lies in its understanding of the structure of these Narrative Methods.

The Dramatica theory of story splits potential Mindsets (structures of story) between TBOS an SBOS. The TBOS or Time-based Operating System sees with time to then break things apart into space. The SBOS or Space-Based Operating System sees with space to then approximate time. This difference is why the TBOS Holistic mind finds the relative proximity of a relationship concerning, while the SBOS finds the duration of import. Seeing time clearly, the TBOS-mind wants to spend more of it together and considers distance a problem. Seeing space more clearly, the SBOS-mind wants to make sure the time "spent" doesn't impinge on other activities.

Subtxt's InstantScene feature considers this understanding while presenting a narrative and provides tools to help you use these concepts while writing a short story or synopsis.

NOTE: This approach is not needed, or even accurate, within the context of a complete story. The current model of Storyforming in Subtxt (March 2021) relies on a Linear-biased, or SBOS, approach to approximate Holistic thought. Applying the approach below to a complete Storyform would diminish its effectiveness.

Switching Mindsets on the Fly

Tap the Relationship button located between the Clipboard and the New Scene button, and Subtxt automatically flips the last two items in the current Narrative Method. This circular order around the quad mimics the Holistic--or Temporal--view of a quad of items. Insteaed of ending in a position of Power, the Holistic sequence of events sets off in a new direction through Flow (again, the article The Holistic View of Time goes into this in much greater detail).

Flip it for our first scene about Self Interest, and the sequence of events now reads: 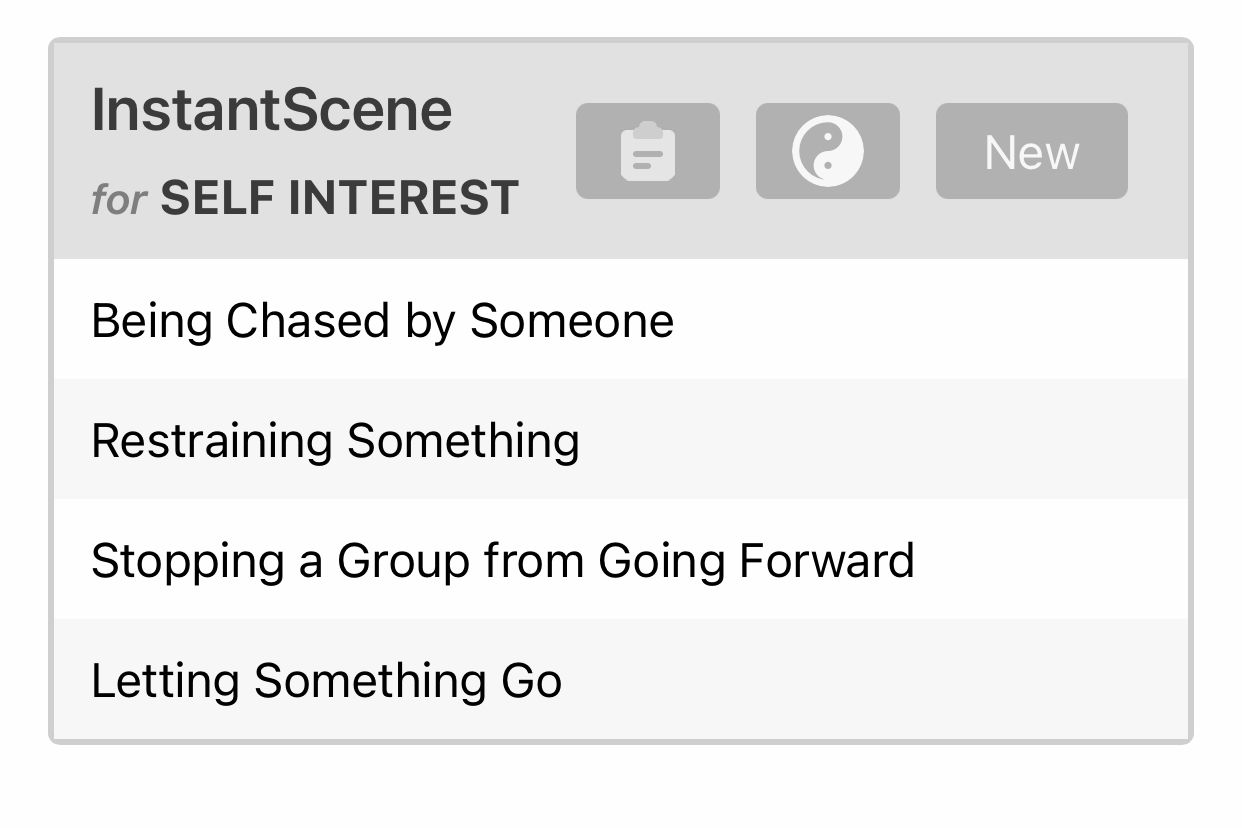 Instead of concluding our scene with a righteous stand-off that results in our heroes getting away (typical of a Linear mindset), this scene now finds the cross-country caravan managing the relationships within the group:

On the road from Mississippi to California, a gold-rush caravan finds itself chased by marauders. Led by experienced riders, the caravan restrains anyone from falling out of line-making it easier for the marauders to pick them off one by one. Those with a more enlightened view of the situation prevent their teams from moving forward with the rest of the pack. The marauders--sensing these dropouts have nothing to steal and won't get in the way of their own success--blast by them on their way to stop the leaders of the pack. As hard as it is for some of them to watch, those teams that held back let the others go knowing that eventually what is theirs--will come to them naturally.

Can you sense the difference between the two examples?

That's the difference between writing story structure from a Linear point-of-view and writing a story from a Holistic Mindset. The first looks to cause-and-effect, problems and solutions, winners and losers. The second looks to the balance between groups, the relationships, and the inequities that need to be managed in order to set off in a new direction.

You can do the same with the scene about Truth: 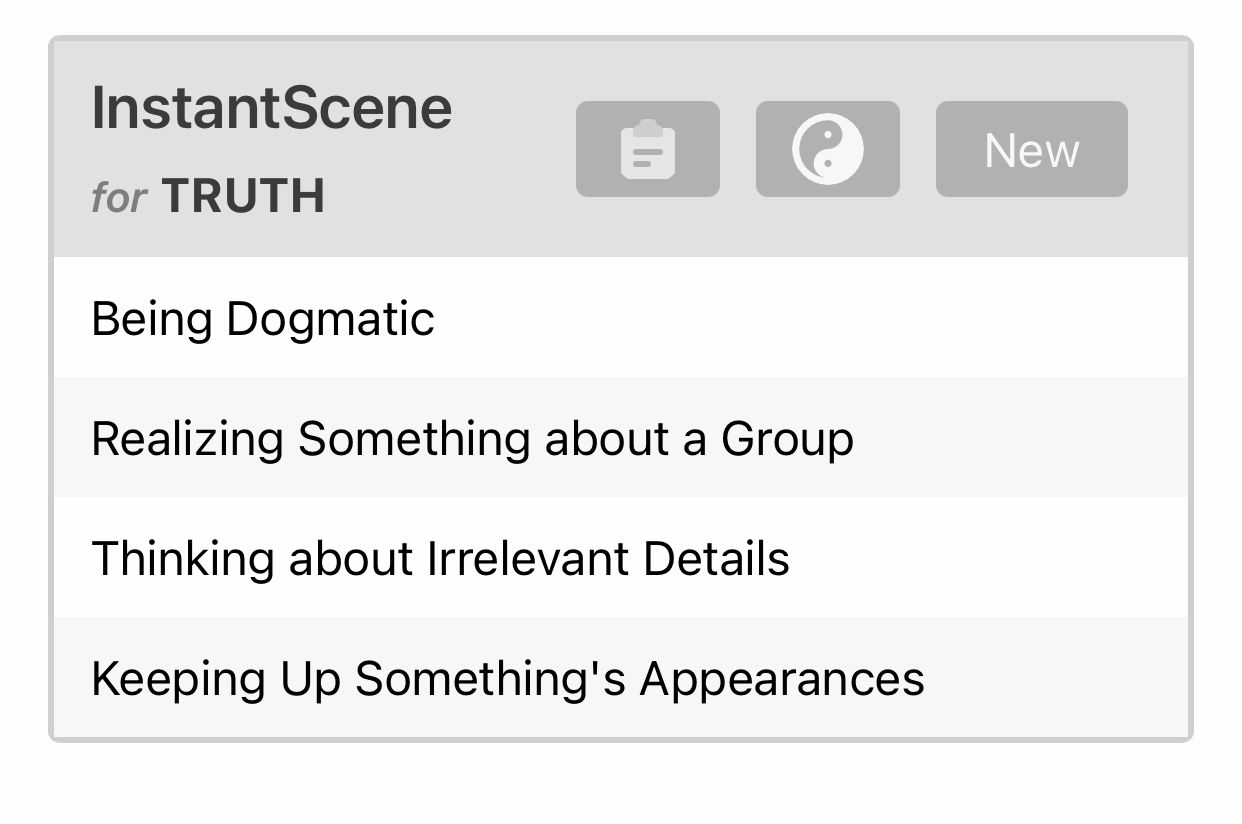 An astrophysicist finds himself up late at night fighting Flat-earthwrs on Twitter. The realization that these “kooks” and their pleasant joyful lives embody the principle of Ignorance is Bliss only stokes the fire of his ire. But as a man of science, he can’t deny the primal search for truth, a search that brought his colleagues to question the truth behind Einstein’s theory of general relativity—especially after the recent visualization of dark matter throughout the universe. The astrophysicist steers the conversation towards the irrelevant details of Einstein's life: his romantic daliances, the kind of food he ate, and his sleep schedule. Questioning the super-genius and bringing Einstein's legendary status back down to Earth ingratiates the astrophysicist with the Flat-earthers, believing him to be a skeptic just like them. Feeling the warmth and comraderie of those just as enamored with the search for truth, the astrophysicist finds himself keeping up the appearance that he's just like them--and eventually, the more he starts to feel a part of them, keeps up the appearance of being a dogmatic man of science himself.

Same "outcome" as the first story, but this version plays on the relationships between the characters--not the cause-and-effect, What do I get out of this? mentality. There is no logical sense to diverting the conversation to Einsteins' irrelevant details, yet it manages to upset the balance between things--a power that develops into a constant flow of growth and eventual transcendence.

InstantScenes are Not Complete Stories

When would you use this in your screenplay or novel? You wouldn't. The Storyforms and Plot Progressions found in Subtxt are specifically engineered to work within a Linear-biased mind. In other words, the Holistic Storyforms you find in Subtxt are what holism looks like to a Linear mind. You can certainly make the switch in your head (the last two items), just know that you're approximating something that is already approximated.

To offer a realistic and accurate account of story structure from within a Holistic mind would require a complete re-write of the Subtxt engine--one that looks to relationships first, and then reason. Such a model, while interesting in and of itself, demands a technology that favors biochemistry over neurology--something not readily available at the time of this publication (Summer 2021).

For now, we're content with a Linear-biased model as it affords the greatest amount of Audience acceptance.

We leave the option in InstantScenes as a means of continuing the conversation--a means by which to foster further development into narrative theory.