The second season of Stranger Things pays homage to James Cameron's Aliens more than once. Peppering episodes with familiar imagery and lines straight from the movie, the Netflix series provides ample evidence of the film's impact on movie and television culture. No surprise—the film is often touted as the screenplay to read for writers new to the craft. But is the popularity for the Space Marine thriller based on witty and memorable dialogue—or is there something more lying underneath the surface?

A complete narrative represents a single approach towards resolving an inequity. To encapsulate all the different ways one can solve an inequity, the construct of "a story" presents four different perspectives on this same imbalance. Conflict plays out differently depending on the point-of-view you take and therefore, it's essential that we see everything. Matching the four different ways we see the world and can appreciate differences, these Four Throughlines ensure integrity of the presentation and a completeness of the Author's argument.

The Objective Story Throughline steps outside and away from the familiar trappings of a singular perspective to offer us a third-person dispassionate point-of-view. Objective and universal, this aspect harmonizes with the Main Character Throughline to give a sense of what it feels like to be both within, and without, of a problem.

Finally, the Relationship Story Throughline bridges the chasm between plural objective and singular subjective to give us that rare—yet, as equally important—plural perspective. Our problems sit separately from my problems or your problems or even their problems.

Combined, these Four Throughlines develop a greater appreciation of the various methods by which we solve and resolve the inequities in our lives.

On the surface, Aliens tells the story of Space Marines who set out to discover what happened to a group of hapless colonists on LV426. This Objective Story Throughline perspective tells of the Physical nature of the conflict between man and alien: bloody skirmishes, strategic invasions, and mano y mano face-offs shape the story's central inequity as seen from afar.

Deep down, the film tells us more.

The Director's Cut of Aliens offers vital insights into Ripley's personal Main Character Throughline. Lost in space, frozen and unaware for decades, Ripley (Sigourney Weaver) awakes to find she outlives her only daughter. The guilt and regret she feels for missing the chance to mother her baby define a Universal reality—you can't change the past. Her struggle to redefine her place in this new arrangement of physical reality becomes our struggle as we empathize with her plight. 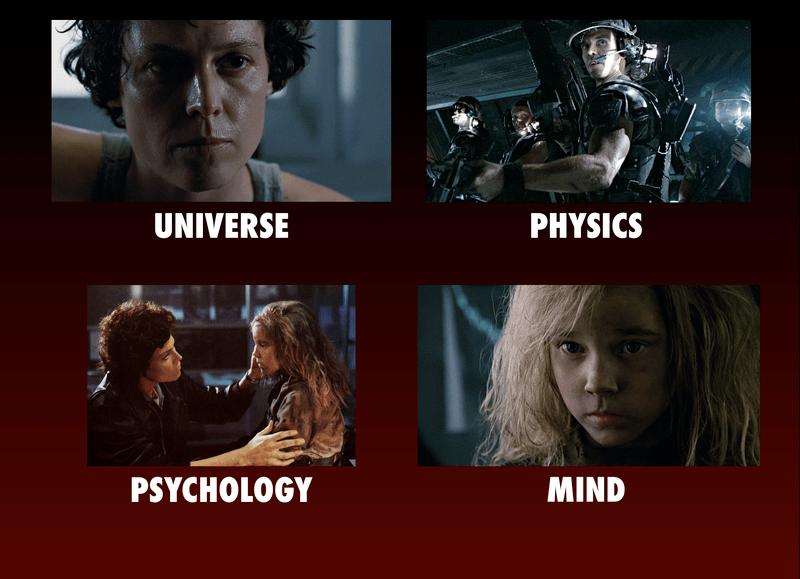 The Throughlines of Aliens

Along comes Newt (Carrie Henn)—a prime opportunity for Ripley to develop a meaningful and lasting relationship to replace the one she lost. The Relationship Story Throughline, however, encompasses both poles of an emotional bond—not merely the connection as seen from one character. In Aliens, the mother/daughter relationship finds Psychological terror as its source of conflict and fitting into each other's lives as its point of resolution. Turning dreams into nightmares and imagining a scenario where they both live to support and encourage one another details the aspirations of their bond. In the end, Newt leaps into Ripley's arms and cries out "Mommy"—an emotional release for both child and parent.

Three Throughlines does not a story make, and in Aliens, Newt's confrontational Mindset rounds out our look at conflict. As Influence Character, Newt presents an alternate approach towards solving the story's problem. Assured and self-reliant, Newt knows what to expect—refusing to give in to any delusions of being rescued or protected. The abandonment she feels from the loss of her parents harmonizes with Ripley's sense of abandoning her child; Newt's knowing that she must be the one to take care of herself motivates Ripley to take on the same point-of-view.

"Get away from her, you Bitch!"

Ripley's heartfelt and deeply-held conviction resolves both the Main Character and Objective Story Throughlines and leads to a satisfactory resolution of the story's primary inequity. More than merely a great line, Ripley's change of perspective represents the final step in the process of conflict resolution that sits at the heart of every great story.