Throughline Thursdays is back!

After an extremely long hiatus, the ever popular Narrative First feature returns to give writers and producers of narrative fiction everywhere greater insight into how conflict in a great story works.

The key to the diagram below is this: When identifying the source of conflict in a complete story, only one arrangement works across all Four Throughlines. You can always find elements of each Domain in every Throughline, but there were only be one Domain for a Throughline that resonates with the other three Throughlines.

At times it may seem as if we shoehorn stories into different boxes in order to somehow prove Dramatica right. You may sense hints of confirmation bias in our analyses or in our articles on story structure & story theory. Nothing could be further from the truth.

Dramatica is a self-checking theory of story. In fact, the source of all frustration with the theory lies in the fact that it won't let you get away with confirmation bias or caveats. You can try to shoehorn in a singular source of conflict or a problematic issue for a particular Throughline, but you won't find that balance on the other side. In short, when you can easily find examples of conflict for all Throughlines at once, the entire hologram of narrative dynamics for that story will click into place.

Developing that sense of story is the foundation for a life of great writing.

The Four Throughlines of a Complete Story

As a reminder--or brief introduction if you are new to Dramatica--the Four Throughlines provide an Audience different perspectives on the central inequity of a story:

As you start to identify the source of conflict in each of these Throughlines, two rules exist:

Same with the Main Character & Influence Character and the Objective Story and Relationship Story. Conceptually, the latter might be more difficult to comprehend but the dynamic between the two remains. Consider Arrival below: the relationship between Louise and the aliens directly impacts the Objective Story of trying to understand these creatures and vice versa.

The Only Arrangement of Conflict that Works

In Arrival, linguist Louise Banks (Amy Adams) struggles with painful memories of her daughter. Her "flashbacks" bring us into the story by offering the personal, intimate perspective found in the Main Character Throughline. As Audience members we grow with Louise and overcome our own Fixed Attitudes regarding time and our mind's ability to deceive.

Challenging the linguist to think differently, the Hectapod's concerns meet with Louise's concerns to form the foundation of the Relationship Story Throughline. The endeavor to manipulate how she thinks pulls the two closer and closer together until there exists a deeply felt sadness at the loss of one of the aliens. 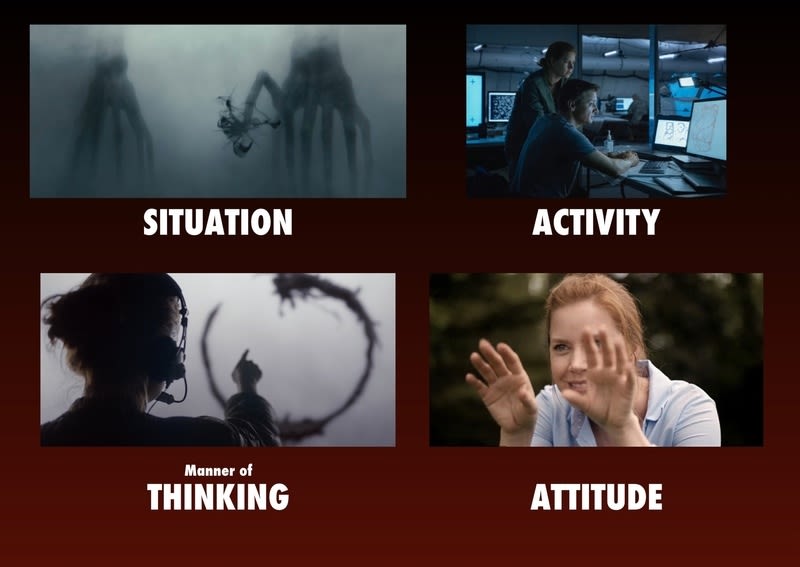 The Throughlines of Arrival

The Hectapods find themselves in a difficult Situation: if Earth doesn't get it's act together in the past, there will be no future for the Hectapods. Their ability to cross space and time to deliver an enigmatic message fulfills the Influence Character Throughline's purpose of impacting Louise to adopt a different approach.

And only by adopting a different approach herself, can Louise finally offer the key to resolve the Objective Story Throughline that finds Earth on the brink of all-out war. Communicating with aliens, leaking information, dissolving alliances, and committing treason define problems of Activities.

As you can see, arranging the Four Throughlines to cover these four sources of conflict feels right. You might be able to find instances of Louise struggling with her Situation of being alone, but would you be able to find issues of Fixed Attitudes in the Hectapods? They don't impact Louise's Situation, they impact and challenge her Attitude.

Likewise, you can find instances where the Hectapods manipulate characters other than Louise, but then can you find examples of just Louise and the Hectapods trying to understand one another? Not really--that struggle exists for everyone in the story and therefore belongs in the Objective Story Throughline.