A functioning narrative is an artifice—a construct for understanding the means by which we resolve an inequity within a set of contexts. Four different perspectives define this set:

The net result of these four perspectives all focused on a single inequity is a singular grand context. An Author matches perspective to Throughline to grant the Audience easy access to these point-of-views:

The purpose of these Throughlines, therefore, is to offer different ways to see the same inequity. The storyform that develops from these perspectives presents a single approach towards resolving that fundamental inequity.

In Blade Runner:2049, that inequity is birth.

In Blade Runner:2049 bioengineered humans called replicants integrate with “real” humans. Servants or slaves, they answer the call of their programming—dutifully participating in a wide range of problematic activities as soulless robots. The revelation of a miracle—of a child born to a replicant—sparks the inequity of the narrative. The Objective Story Throughline—the perspective that sees this inequity from a They point-of-view—observes the Physics of the conflict. The investigation and the attempt to stop the coming rebellion ignites the inquiry into and apprehension of this missing child.

K (Ryan Gosling), a newer model replicant, sees the inequity in a different light. From his Main Character Throughline perspective, the conflict appears fixed and external. The Universe brought to life a Chosen One, and K finds ample evidence that he fits this epic calling. Was I born or manufactured? The answer forms a destiny from which he cannot escape. 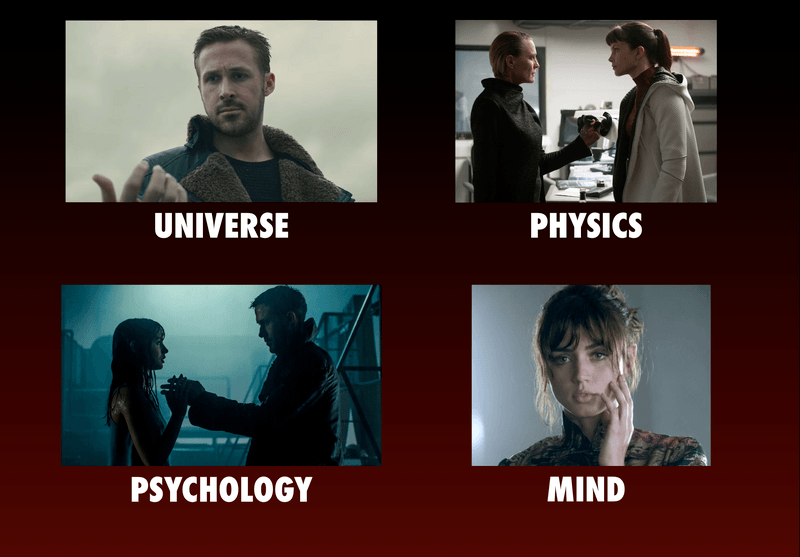 The Throughlines of Blade Runner: 2049

As a function of her Influence Character Throughline perspective, holographic girlfriend Joi (Ana de Armas) challenges K to think differently. From her You perspective, the single inequity of Blade Runner: 2049 appears both fixed and internal in nature. It doesn’t matter what you are; it only matters what you know to be true. While sharing the same quality of fixed with K’s Main Character, Joi’s version of the conflict stems from within--from Mind. Deckard (Harrison Ford) reinforces this point-of-view towards the end of the narrative.

With three different perspectives on this single inequity accounted for, only one remains. The Relationship Story Throughline perspective sees the central inequity as a condition of problematic Psychology. Integration of the Objective Story brings violence and slavery; integration within the Relationship requires subtle manipulation of our concept of each other. How do We integrate into each other’s lives when our essential nature makes the act virtually impossible? The constant adaptation to suit the needs of the other brings us closer together—while at the same time, deepening our divide.

With a better understanding of the inequity as seen from these four different perspectives, an appreciation of a single approach towards resolution rings clear. Instead of worrying about what you really are, be what they need you to be. In return, you receive a measure of peace—for yourself, and for the countless others waiting for the capability to make themselves heard.

Previous ←
First Look At An Analysis Of se7en
→ Next
Aliens