A complete argument—or complete story—is an analogy to a single human trying to solve a problem. Character, Plot, Theme, and Genre simply stand in for this psychological process we all know.

Reducing the problem-solving process down to its larger pieces, one finds Four Throughlines in every complete story:

These represent the four different perspectives our minds take when evaluating a particular problem:

With their ship disabled in deep space and life support running out, the crew of Serenity finds themselves trapped in an unbearable situation. To add to this immediate concern, we learn through flashbacks the disparity that exists in how they feel towards one another. Some think of the ship as a family, others see it as a means to an end. The first defines the problem from an objective point-of-view, the second from a subjective perspective.

To better understand the problems we face in our lives, we classify conflict into four different areas:

Complete stories assign a perspective, or Throughline, to an area of conflict. This approach ensures that we see a problem from all different sides—its why a story feels complete.

Achieving Through a Force of Personality

In a complete story, the Main Character maintains an individual preference for solving problems. Some prefer to address issues externally by taking action, others by changing themselves internally. In Dramatica, the first is a Do-er, the second a Be-er.

Contrary to his behavior throughout most of the season, Malcolm Reynolds (Nathan Fillion) prefers to adapt himself to solve problems in Episode 8. Mal tempers his personality to effect change in others, playing the role of "dad" for some and "captain" for others. To, Mal Serenity is more than a ship—it's an idea.

The amount to which the various crew members do what Malcolm needs them to do defines their Influence Character perspective.

A Shared Perspective of Influence

In this episode of Firefly, Zoe (Gina Torres), Wash (Alan Tudyk), Kaylee (Jewel Staite), Inara (Morena Baccarin), and Cobb (Adam Baldwin) maintain a mutual perspective of influence on Mal. Wash brings the ship online. Kaylee fixes the engine. Cobb brings the muscle. Inara rents space on Serenity. Each of them does what they need to do to keep the ship afloat, but neither responds to the "idea" of Serenity.

Until the final climactic moment. 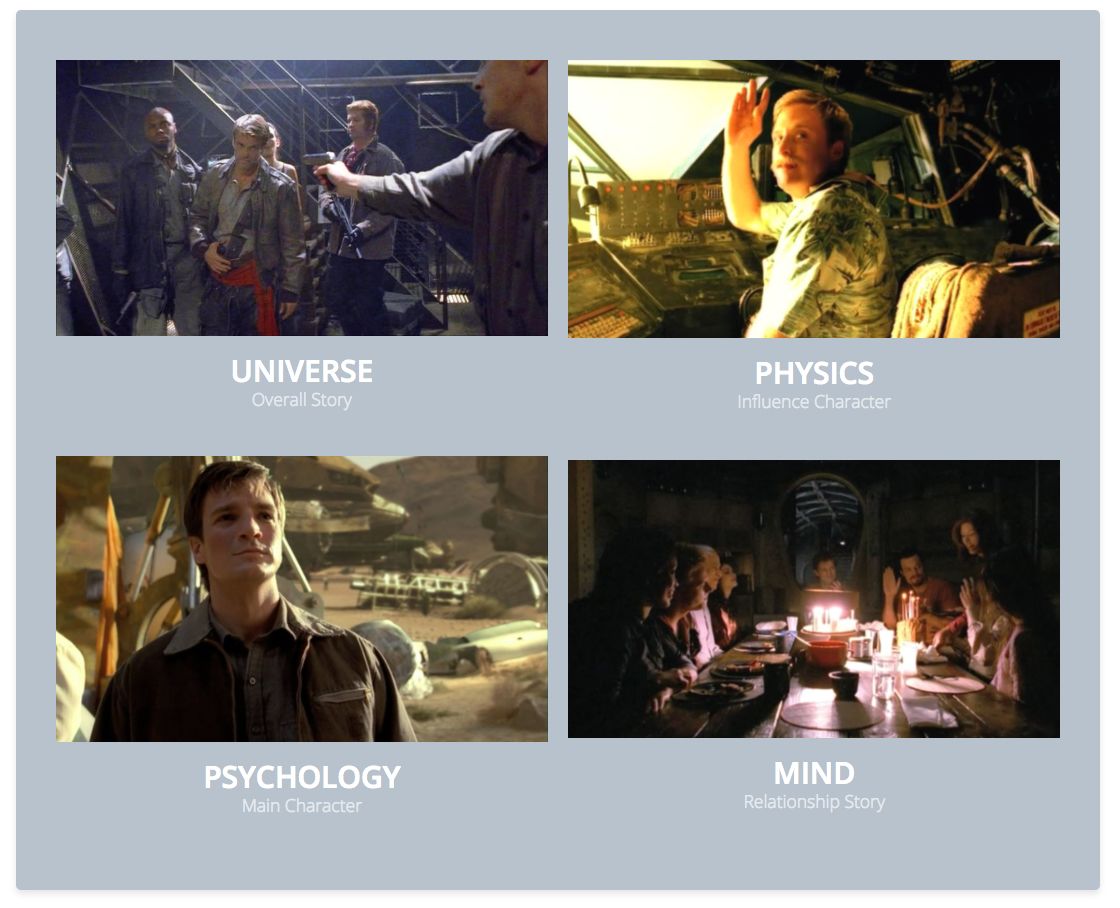 The Throughlines of Firefly: Season 1, Episode 8

The Balance of Conflict

By accounting for all four perspectives and all four areas of conflict, the Author guarantees a feeling of completeness in their final work.