A feeling of being perplexed and unable to escape? Check.

A challenge from another to think differently? Check.

A cat-and-mouse relationship that parries back and forth until one undoes the other? Check.

Am I describing Get Out?

Or am I describing What Ever Happened to Baby Jane?

Or maybe Rear Window? Or Sunset Boulevard? Or even Who’s Afraid of Virginia Woolf?

Or am I describing a unique family of perspectives that form a basis for all of the narratives listed above?

Align the Objective Story Throughline in Psychology and the Main Character Throughline in either Universe or Mind and establish the foundation for a Psychological Thriller.

Or rather, establish the umbrella for a Psychological Thriller.

The Dramatica Table of Story Elements presents the four areas, or Domains, of conflict into four towers. Sliced into four levels of resolution, these columns support and magnify the message of the Author. While the bottom three dial in Character, Theme, and Plot, the very top casts all under the shadow of Genre.

Each Throughline–Objective Story, Main Character, Influence Character, and Relationship Story–argue a different understanding of the underlying conflict present within a story.

By assigning a perspective to one of these four towers, an Author generates a comprehensive narrative capable of depicting the totality of their argument. No stone left unturned, and no question left unanswered–a complete story address all four perspectives and all four areas of conflict.

A complete story–like Get Out.

The Four Perspectives of Horror

The psychological horror of Get Out stages evidence of conflict from the Objective Story Throughline. The attempt to manipulate and coerce hapless African-Americans to “coagulate” with ailing and incapable White Americans describes the uneasy peace between the two parties. Therapy sessions with Mrs. Armitage leave visitors open to suggestion and ready for their final transformation. That dark and foreboding atmosphere present the moment Chris steps onto the grounds of the estate finds its source within the Domain of Psychology. 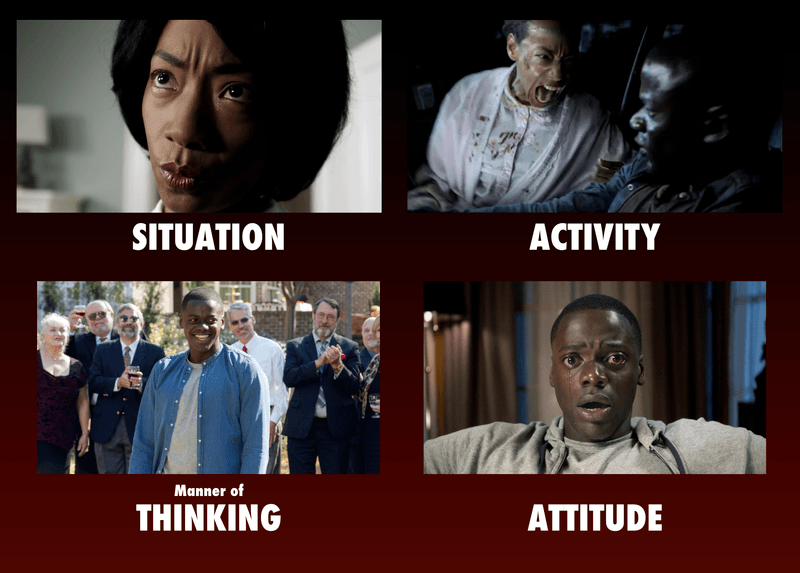 The Throughlines of Get Out

Chris Washington (Daniel Kaluuya), at first reticent for a hypnotic resolution to his nicotine addiction, finds the procedure a catalyst towards the breaking down of his justifications. Unlocking uncomfortable memories of the night Chris let his mother sit unidentified at the sight of a hit-and-run accident, Missy opens up Chris’ locked and troubled Mind. From his Main Character perspective, the Audience experiences what it feels like to tumble into that “sunken place” and feel as if no one can hear you scream.

Cheerful and agreeable, Georgina and Walter tend to their master’s needs with a kick to their step and a whistle between their teeth. Slaves to the psyches of grandfather and grandmother Armitage, these unwitting victims challenge Chris with their Influence Character perspective of Universe. Both Chris and the help struggle against an unseen master–the help physically enslaved, Chris mentally enslaved. Their projection of what Chris should expect to find at the end of that road compels him to finally gain the courage to break free of his mental restraints.

Chris escapes out into the dead of night only to find Walter tearing across the lawn at full speed. Stepping out of the way, the gardener blasts by him without saying a word. Turning, Chris observes Georgina combing her hair, eyes glossy and detached. Reaching out to fist-bump Andre Hayworth–another victim–Chris receives a firm handshake instead. The perspective of the Relationship Story casts light on these problematic activities and completes the narrative model of the mind with its portrayal of the Physics Domain.

Nothing Left to Explore

With every perspective accounted for and every Domain rendered, the narrative of Get Out warrants appreciation and critical acclaim. One finds it easy to vouch for the film in conversations with friends and family–an acknowledgment of something more than a mere tale of horror. Treasure the technique and expertise on display with this movie and be inspired to repeat the same for your work.