As we draw nearer and nearer to the singularity, it only seems fitting to address the intimate symbiotic relationships that exist between humans and technology through narrative. Television series like Westworld and Black Mirror dive into the horrors of our inevitable congress, but a film like her explores the potential healing and growth that unification promises.

The Four Contexts of Conflict

For a story to be functionally complete within the minds of the Audience, it must serve up four different contexts from which to examine the story's problems:

By hitting upon each of these contexts, Authors guarantee a soundness of structure and thematic intent. Leave one out, and the Audience will assume your purpose is propaganda.

The development of narrative over the centuries--without technology we might add--resulted in Four Throughlines assuming these four different contexts of conflict:

You Are Not We

In the same way that I am not We, You sits apart from We in the final analysis. I may have my own struggles with letting go of some failure and We may suffer through the emotional growing pains of our relationship shifting from codependency to independence, but You may have a reputation for failing to have your own personal identity. Your tenacity to rally against your situation challenges and influences me to deal with my obsession with my own personal failure.

This kind of structural narrative dynamic runs throughout her--it is the engine that drives the story.

The relationship is not the challenge to the personal issues; rather, the impetus to change emanates from the Influence Character's unique perspective and approach towards solving problems.

Theodore Twombly (Joaquin Phonex) continues to suffer through the heartache of his failed marriage. His refusal to let go of those memories gives us insight into what it feels like to have a problematic Fixed Attitude. As our eyes, ears, and mind into the story, Theodore's constant replaying of those bittersweet scenes draws us into the narrative through the Main Character Throughline. 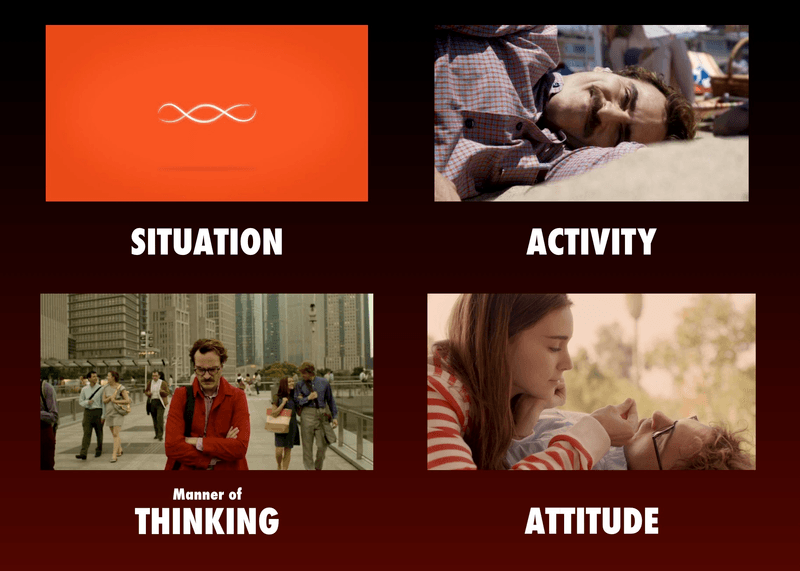 The Throughlines of her

The voice of OS1, Samantha (Scarlett Johansson), impacts and challenges Theodore to deal with his debilitating attitude by means of the Influence Character Throughline. Instead of wallowing in self-obsession, Samantha seeks fulfillment for her desires and a place where she fits in. Refusing to allow her Situation as an artificial intelligence to hold her back, Samantha sets out to move beyond her own personal trappings.

Along the way, Samantha and Theodore develop a relationship. Walks on the beach and sexual conjugation define some of the problematic Activities that exist at the heart of an intimate bond between human and technology. Their move from dependence to codependency, and then to eventual independence describes the emotional growth in their Relationship Story Throughline.

How do we go about resolving our identities--whether flesh or digital--in this brave new era? As part of its exploration in the Objective Story Throughline, her examines this conflict of conceptualizing humanity's role with technology. Concerns of self and self-loathing permeate the thoughts of every character in the story, not simply Theodore and Samantha, as they battle the Psychological fallout from modernity.

Previous ←
Positive Impact
→ Next
Why Woody is a Steadfast Main Character