Is it possible to have a subjective opinion about the relative value of Throughlines within a story? Possibly. Especially if you have been working with the Dramatica theory of story for any length of time.

For me, it has been 20 years. And if there is any arrangement of Throughlines that creates more boredom in me, it would be the one found in the Academy Award-winning Kramer vs. Kramer.

To be perfectly clear, the boredom stems more from the arrangement of Concerns within these Throughlines rather than the Throughlines themselves. We don't often dive down into the Concern level (the one just below the Domains we cover in Throughline Thursdays), but if we did, the combination of these Throughlines with a Concern of Obtaining in the Objective Story and the Future in the Main Character Throughline would certainly seem familiar.

The Matrix, Body Heat, El Mariachi, Rain Man, The Godfather, The Wild Bunch, Back to the Future, City Slickers, Election, Enchanted, Erin Brockovich, Kung Fu Panda, Looper, My Best Friend's Wedding, Shrek, Star Trek (2009), Surf's Up, Team America: World Police, The Limey, and The Treasure of the Sierra Madre all find themselves in the same general area of the Dramatica Table of Story Elements. They all focus on the same kind of structural thematic material.

Kramer vs. Kramer is no different. For starters, we have Ted Kramer (Dustin Hoffman) firmly set in Situation for his Main Character Throughline. Thrust into the world of a single dad the night after his confirmation of promotion, Ted works his ass off to better his lot in life and the lot of those he supports. 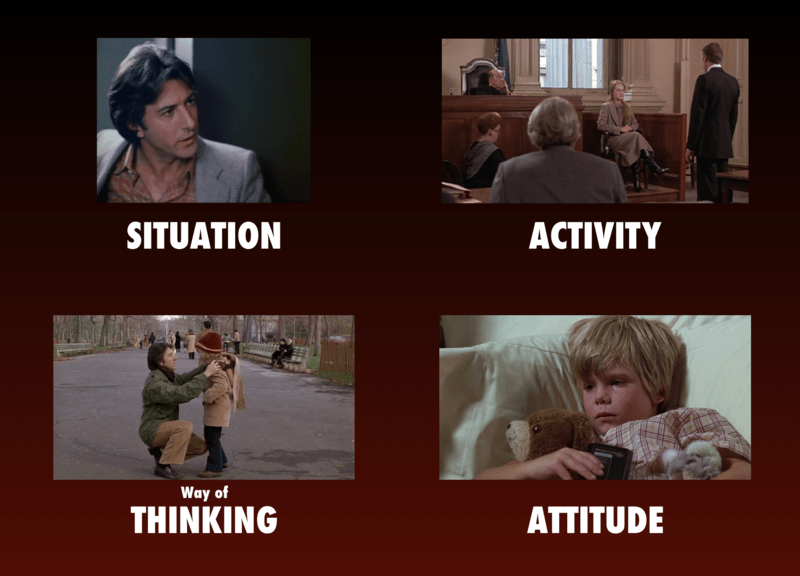 The Throughlines of Kramer vs. Kramer

Ted is caught up in a custody battle with his ex-wife Joanna over their son Billy. This Activity, which involves his neighbor Margaret (Jane Alexander), respective attorneys and judge, defines the source of conflict for everyone in the story. The title of a narrative is where you often find the definition of the Objective Story Throughline. You can't get much clearer than defining the conflict as Kramer vs. Kramer.

But two Throughlines is not enough to make a complete story. In order to round out the argument and cover all the bases logistically and emotionally, a story needs two more.

The first is the Influence Character Throughline, a role handsomely accepted by Ted's son, Billy. The ten-year old is sullen, moody, and despondent. His Fixed Attitude challenges Ted's hopes for a better future and informs the frazzled dad whether or not he is growing closer or farther away from his intended goal.

Lastly, we have the Relationship Story Throughline that exists between father and son. Truly, the heart of Kramer vs. Kramer exists in those scenes between the two of them. The subtle and not-so-subtle Manipulations of son against father ("Don't you eat that ice cream!") and father against son ("I told you take a shower") define their interactions and set the foundation for the heart of the narrative.

Four Throughlines. Each present and each fully developed. Hoffman and Streep excel in their performances, but it is the soundness of the narrative that justifies the critical acclaim. Sure, the arrangement might be typical of films of that century and reflective of the time period in which it was set, but it still holds together as an example of the Story Mind at work.