Manchester By The Sea

This week we take a look at Kenneth Lonergan's laugh-riot, Manchester by the Sea. Starring Academy Award-winning Casey Affleck as Lee Chandler--a janitor saddled with responsibility of raising his deceased brother's teenage son--the film deftly covers the entire gamut of conflict. By crafting a complete story, Manchester tells more than a tragedy--it tells something lasting and meaningful.

Remember that the key to crafting a complete story lies in positioning the Main Character and Influence Character Throughlines diagonally across from each other and the Objective Story and Relationship Story Throughlines diagonally across from each other. This allows for greater instances of conflict while ensuring that the story addresses every possible kind of conflict. One can place each of these Throughline in a single area, but only one arrangement of all four feels right. 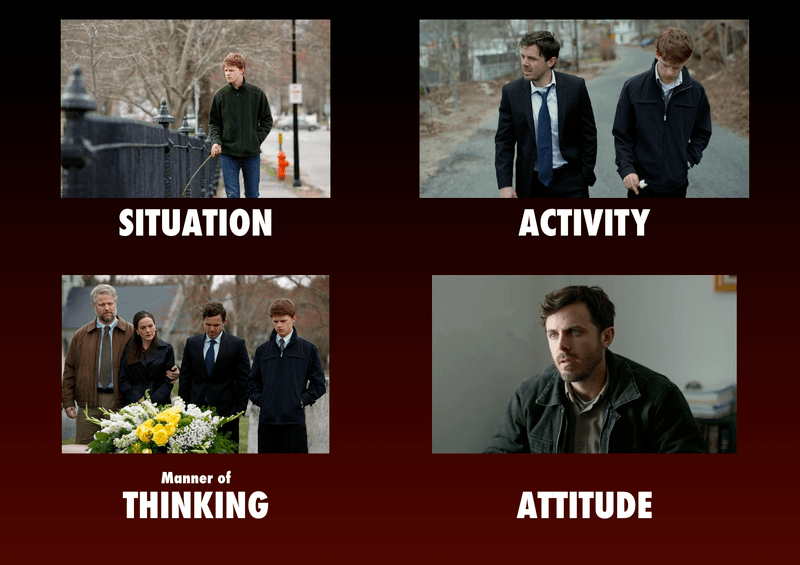 The Throughlines of Manchester by the Sea

Lee is a man with a bad Fixed Attitude. Whether lacking the simple courtesies of day-to-day interactions with tenants or completely oblivious to the subtle advances of those attracted to him, Lee couldn't care less about his fellow man. Difficult at first, the structure of the narrative and the placement of Lee at the center of the Main Character Throughline makes it easy for us to empathize with what many would call an "unlikable" character. The Academy's recognition of the brilliance of the performance and the story Lee exists in should likewise banish any future notes regarding characters who don't save cats in the first ten minutes of a story.

Challenging Lee to consider a different approach to life is Lee's teenage nephew, Patrick (Lucas Hedges). While facing a similar loss as Lee, Patrick refuses to withdraw in the same manner. Concerned with staying near friends and girlfriends who support his aspirations, Patrick refuses to be defined and locked down by his unfortunate Situation.

The heart of the story, however, lies in the growing relationship between Lee and Patrick. Their pseudo father/son relationship defines the Relationship Story Throughline of Manchester and gives emotional balance to the logistical storyline of honoring Joe's dying wishes. The dynamics of raising and taking care of a teenager without the accretion of childhood and preteen adolescence sparks an inequitable bonding. Patrick's attempts to hookup with various girls and his attempt to get Lee to the do the same with the mother of his girlfriend threatens to keep them from truly understanding one another. Throw in the constant need to be driven to practice and the refusal to dig up Joe's body and you have the foundation for a relationship facing problematic Activities.

Joe's passing set one essential stipulation: that Lee take responsibility for raising Patrick. This plan positions everyone in the Objective Story Throughline against each other by way of their conflicting Manners of Thinking. Lee thinks himself "just a backup" while Joe's lawyer thinks only of fulfilling his client's dying wishes. Patrick thinks of the various elements he needs to arrange to set his life into motion while George (C.J. Wilson) thinks only of a life without any kids in the house. And Randi thinks there is someway she and Lee can somehow reintegrate themselves into each other's lives.

Manchester by the Sea owes much of its ability to connect with Audiences to the arrangement of its Four Throughlines. By positioning them in a way that guarantees the greatest opportunity for conflict, the story locks us in to the argument at hand. Sometimes, you really can't beat it.

Previous ←
Arrival
→ Next
The Reason For Certain Progressions Of Plot