Over the weekend, I made a startling discovery—the storyform for Walt Disney's animated feature Pinocchio was not on our service for writers, Subtext.

I say startling because I was the one responsible for the initial analysis. In February of 2014, I filled in for Chris Huntley at the Dramatica Users Group meeting. For those unfamiliar with the meeting, this is a monthly gathering where several writers well-versed in the Dramatica theory of story come together to extract the deep thematic structure of grand narratives.

Apparently, I forgot to upload our findings.

I remember the most exciting part of our discovery was the idea of the Overall Story resting in the Psychology Domain. Typically, most animated films find their Overall Story in the Physics Domain. Whether it's the story of a young Viking teaching his fellow Norsemen the value of a dragon's life or a fat panda kicking on-screen ass, the big-budget animated feature trends towards conflict in the external world—not the internal.

And Pinocchio was big-budget for its day.

Yet, the narrative they told revolved around What to do about Pinocchio? The transformation of the wooden puppet into a real boy is more than something merely personal to the Main Character—that maturation draws everyone in the story together. Gepetto, Stromboli, Honest John, and the Coachman all look towards the wooden puppet as a means to change their own lives. 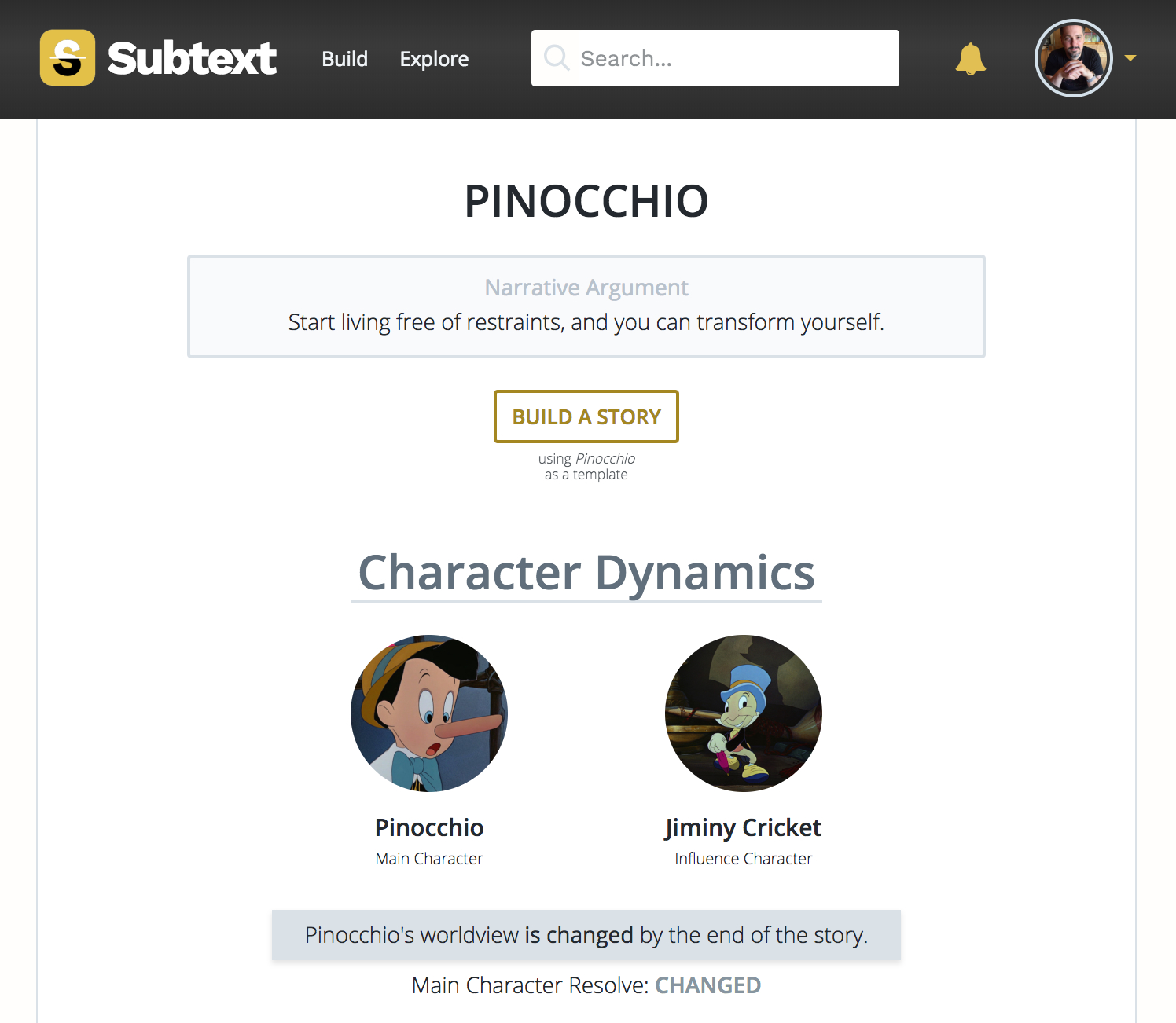 Having seen the film countless times during my years as a Disney animator, I never once considered the notion that this was a sophisticated exploration of dysfunctional psychology. Looking back on it, I see the typical "Coming of Age" story wherein the Main Character's personal Throughline of Universe complements the Overall Story in Psychology.

This dynamic adds an element of character growth towards something, rather than away— a feature present in almost all Coming of Age stories. Big Eyes, Call Me By Your Name, Brooklyn and The 40-Year Old Virgin share this arrangement of Throughlines and tell of their individual Main Characters Starting something new.

Pinocchio is no different.

Changed/Start characters typically exhibit a "hole in the heart." And while Pinocchio is not heartless, he does portray the naiveté of a child unaware of what he or she needs to do to help improve things.

As simple a narrative as Pinocchio is, the film manages to successfully argue a complete and meaningful story--and this accounts for much of its legacy.

On the Awesomeness of Our Subtext Service

Subscribe and receive our FREE PDF E-book on why the concept of a "Hero" in story is outdated, and holding you back from writing a great story.

Success! Please check your email to confirm your subscription.