The Essential Ingredients of Every Complete Story

Instead of relying on taste, Authors should look to what they have to work with in order to create the most delicious story.

When carefully crafting the ultimate meal, chefs obsessively focus on choosing the right ingredients. They know that taste relies on choosing how much of each to put in and when they choose to add them into the dish. In a way, an Author is like a chef and should know the ingredients they have to choose from—not rely on how they think their story will taste.

In the past few weeks, we focused our attention on the Audience Appreciations of story—those Story Points that help up predict and understand what kind of an Audience will embrace our story and how the experience of that story will feel to them. Turning our attention to the essential base ingredients of story, we shift our focus towards a better understanding of how to craft that experience.

We shift our attention towards the Dramatica theory of story.

Dramatica is based on the idea that a complete story is an analogy to a single human mind trying to solve a problem. Character, plot, theme, and genre? These concepts are not about three-dimensional people or complicating events of rising tension. Rather, they function as analogies to what goes on in that gray mass behind your eyes.

And it all started around a campfire.

Way back when, Ugga and Orga would return from their day's adventure and recount what they saw to their fellow cavemates. They told what them what to expect and what to avoid out in the wild. Danger. Excitement. Food. Everything. Eventually, Ugga and Orga wanted to extend their reach beyond their own campfire so they could help out the cavepeople on the other cliff and down in the valley.

But they didn't have access to Twitter or Facebook, and lacked the means to back up their stories or answer any questions posed to them. The only way to effectively communicate what they discovered was to develop a system that covered all the bases, answered all the questions, and accounted for the various counter-arguments other cavepeople might have in regards to their narrative. What if the sabre-tooth tiger didn't come after me? What if I climbed that tree and didn't find a berry? Ugga and Orga needed a way to counteract these trolls. They needed to develop a mind for the others to inhabit.

Over centuries this matured into the storymind—a self-contained model of the human mind at work. Along the way, some tried to define this model to make it easier for others to communicate. Aristotle. Joseph Campbell. Syd Field. Christoper Vogler. Blake Snyder. With each generation understanding grew, yet somehow was still incomplete.

Unfortunately, the hundreds and thousands of years between Ugga and Snyder hid the fact that stories were really just a way to communicate the most appropriate way to solve a problem. Without that reality in mind, any attempt to define story naturally got lost in subjective interpretations of who the characters were and whatever spiritual or transformational journey they appeared to be on. In an attempt to define the who, what, and how, they forgot the why.The true nature of story, it seemed, would remain buried beneath the oceans of time for all eternity.

In 1993, Chris Huntley and Melanie Anne Phillips released the Dramatica theory of story. Instead of looking to stories for patterns and trends of character development and spiritual growth, Chris and Melanie sought to identify the ingredients of story from the other side—from the Author's point-of-view. Those other story paradigms? They explain the experience of hearing or participating in a story.

Ugga and Orga weren't interested in the experience—they were more concerned with this process of communicating their message as clearly and as completely as possible. Those first storytellers realized you can't serve a delicious meal by simply taste-testing your favorite dishes.

You need to know the ingredients first.

This is the Dramatica Table of Story elements at rest: 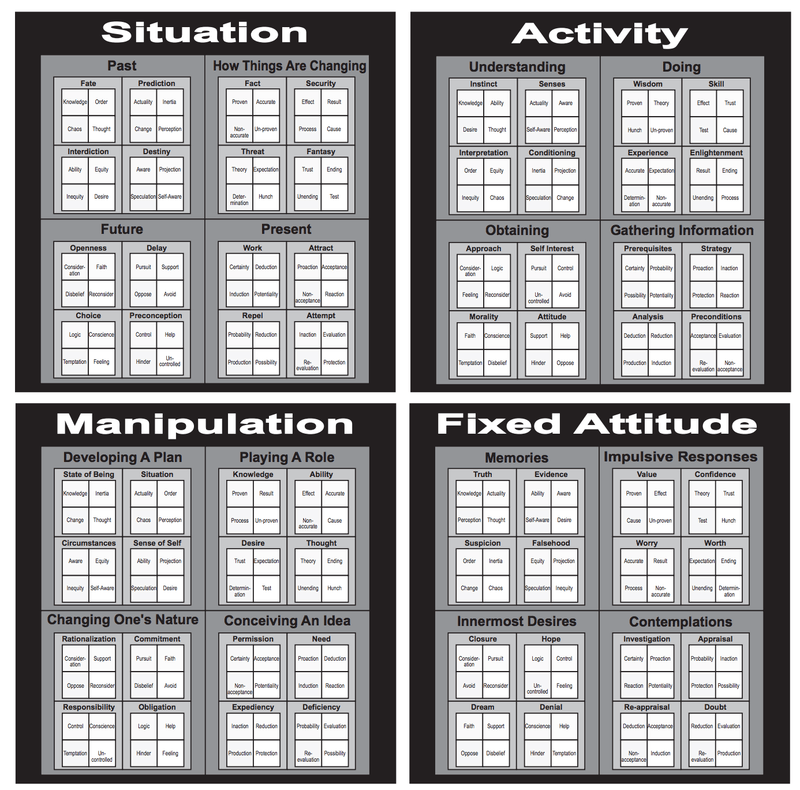 Impressive and imposing, yet perfectly at peace. Self-Interest sits across from Altruism. Pursuit from Avoid. The Past from the Present. And even Inequity from Equity. Every single last diagonal relationship within this model tells of a perfect balance.

No inequity. No story.

In order to make this model messy and create the potential for a story, someone needs to get in there and twist and turn it until the theoretical rubber bands tying these elements together begin to strain under the pressure. Until they verge on the brink of snapping. Someone needs to get in there and start making choices to wind this model up to the point where one tap will send it unravelling, spinning over and over again until it returns to that state of peace.

Dramatica labels these eight questions dynamic because they claim responsibilty for twisting and turning the model at rest into a fully-realized packed-full-of-potential storymind. Other questions and story points concern themselves with structural aspects of a narrative. These fellas focus on the movement between the various structures.

When developing a story, Authors must know the answers to these questions. If they don't, their story will likely sputter out and crash three feet in front of them like the rubber-band airplane they didn't take the time to wind up properly.

Take the time to wind up your airplane.

Every problem is really seen as an inequity between the way we see the world and the world as it truly is. The Main Character Throughline versus the Objective Story Throughline. Understanding where the two converge and which one lies closer to the truth helps us determine how to jumble up that model of the storymind.

At the end of the story, does the Main Character Remain Steadfast in their worldview or did they Change and adopt the Influence Character's point-of-view?

By putting the answers to these two questions together, an Author winds up the model of the storymind resulting in four very different kinds of stories.

In these stories, the Main Character changes the way they see the world by adopting the Influence Character's point-of-view. They may kick and scream the entire way but by the end, they change their resolve by dropping some trait or character flaw. 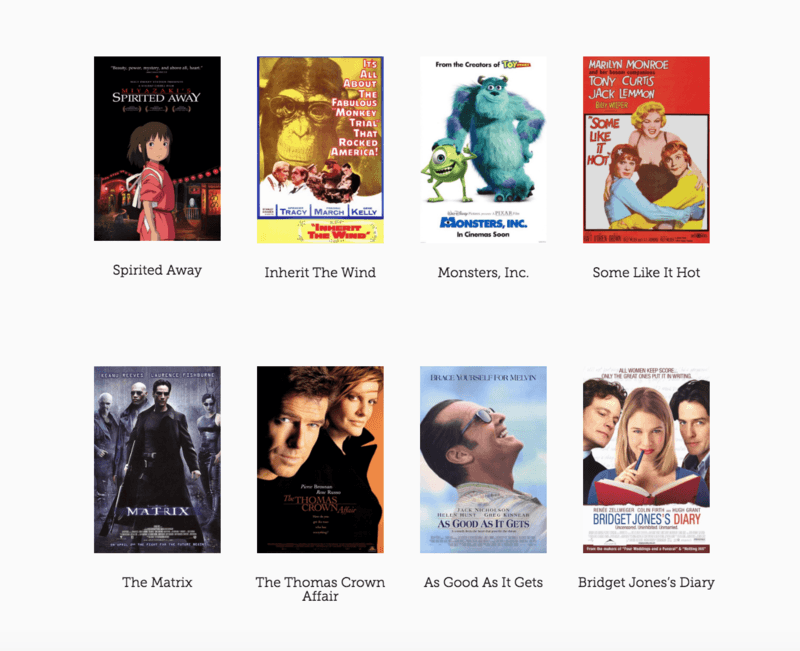 Neo stops doubting himself in The Matrix and starts thinking more like Morpehus and Trinity, Joe (Tony Curtis) stops living the life of a distrustful irresponsible ladies' man in Some Like it Hot, and Sully stops scaring the crap out of little kids in Monsters, Inc.

In these narratives, Authors tell stories of Main Characters who change the way they see things by adding something to their lives. They still adopt the Influence Character's perspective, but they do so by Starting something: 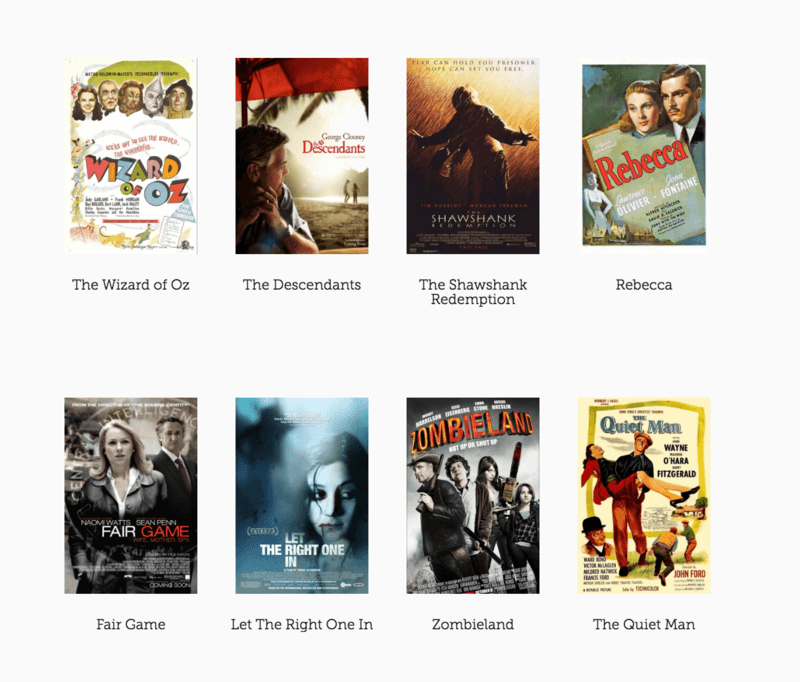 Red starts standing up for himself in The Shawkshank Redemption, Matt King (George Clooney) in The Descendants starts defending his family, and Oscar (Kåre Hedebrant) engages in a little of the unspeakable in Let the Right One In.

Ugga and Orga were trying to communicate the most appropriate way to solve problems in their community. In order to combat all those trolls in the cave down by the river, they had to match up one way of solving problems against another. By showing the result of one approach winning out over the other, they were able to effectively argue and convince those idiots how best to lead their lives.

The Main Characters of these stories Remained Steadfast, holding out for something—or someone—to Stop and change to their point-of-view: 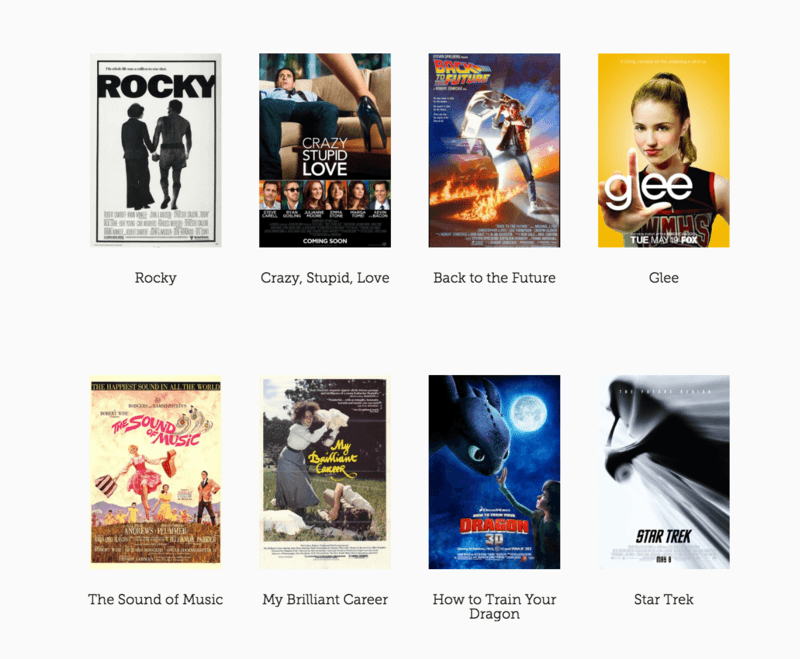 Even with those short explanations, one can see the difference in dynamic tension set by these two essential ingredients of story when compared to Changed stories. That difference lies in the method by which the storymind winds up, and by the potentials the windup ultimately creates.

Finally we look to the Main Characters who hold out in the desparate hope that something will Start: 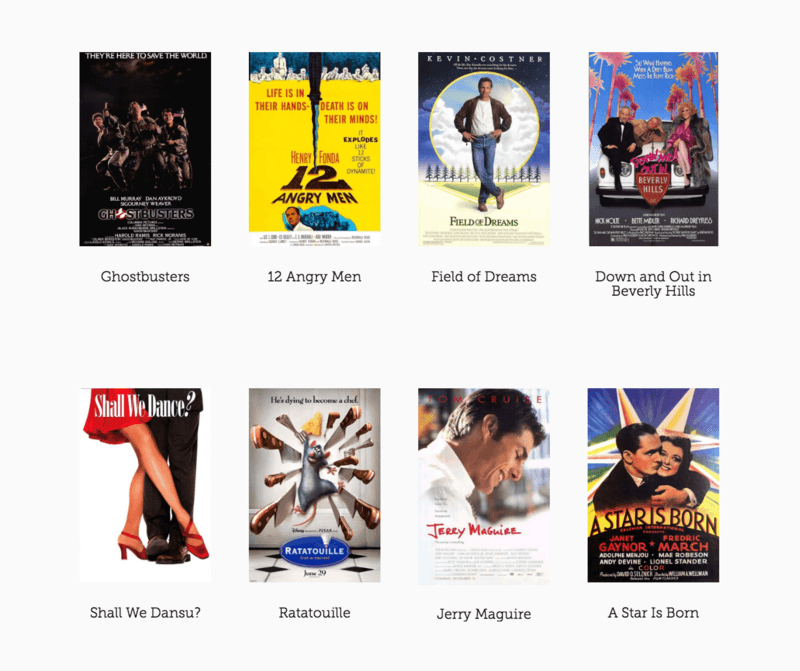 Remy holds out for everyone to start seeing him as a real chef in Ratatouille, Ray Kinsella buys into the whole "If you build it, he will come" idea and dutifully holds out for that moment to start in Field of Dreams, and Juror #8 (Henry Fonda) holds out for the other jurors to start coming to the realization that this kid is innocent in 12 Angry Men.

Again, very different dynamics at work in these kinds of stories. The Main Character in these stories represents the right way to solve problems. By Remaining Steadfast and digging their heels in, they eventually manage to convince the other side to change and adopt their point-of-view.

Already one can see the variety of dishes available with only these two ingredients. Essential as they are to the eventual taste and experience of the meal, the Main Character Resolve and Main Character Growth paint an incomplete picture. In order to completely wrap up the storymind into something full of dramatic potential, six more questions must be answered.

In the coming weeks, we will discuss these essential questions—essential questions that Ugga and Orga knew instinctively centuries ago. By understanding the true purpose of telling a story and appreciating the methods by which the potential of a story manifests, Authors everywhere should be well equipped to create the most savory and flavorful meals.

That should keep the trolls quiet.