Last night was the Dramatica Users Group meeting for Stalag 17, the Billy Wilder film from 1953. Relating the story of American POWs dealing with a traitor in their midst, the film manages to tell an effective and complete narrative as evidenced by the solid storyform we found. 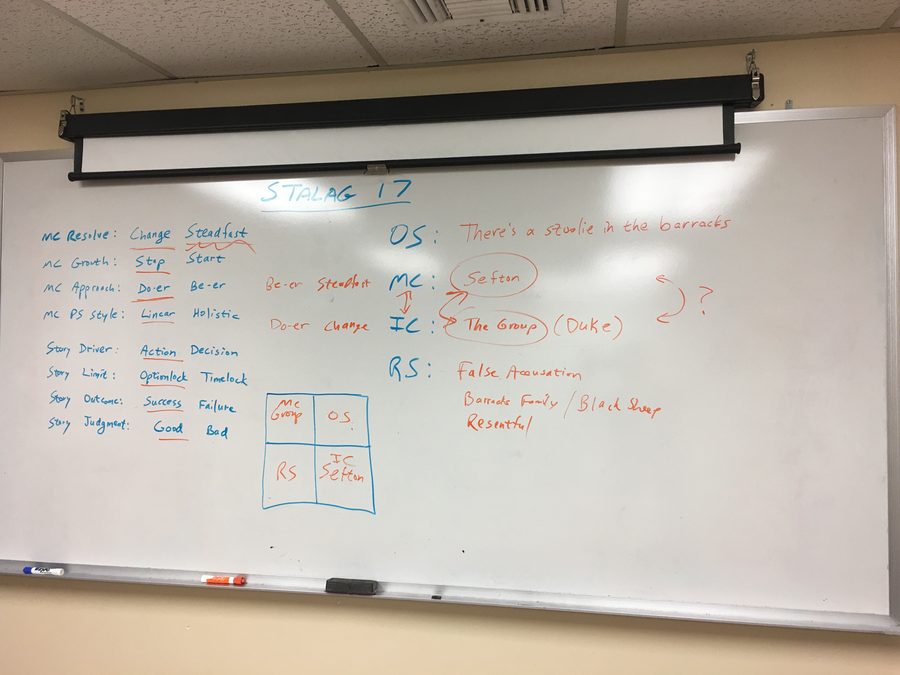 The most interesting aspect of the analysis2 was the collective "group" Main Character Throughline. At first, some considered Sgt. J.J. Sefton (William Holden) the Main Character. He is, after all, the only one we truly seem to care about.

Most think of Andy Dufresne (Tim Robbins) as the Main Character since we see him first and root for his escape. But really, we are never truly Andy-- for the most of the film he is up to something we don't find out about until much later. Instead, we look to Red (Morgan Freeman) and look through Red's eyes. In fact many of the POV shots in that film are from Red's perspective.

The same happens in Stalag 17. While there is that moment at the end where we witness Price's conversation with Sgt. Schulz (Peter Graves and Sig Ruman), many more moments exist where we hear about what Sefton is up to and only learn the truth after the fact. Take for instance the scene where Sefton is off with the female Russian POWs. If Sefton was in fact the Main Character we would have been there with him, experiencing Cossack hospitality along with him.

It is clear then that the men in barracks 4, led primarily by the always angry Duke (Neville Brand), represents our way into the story. The narration by Cookie (Gil Stratton)--while not always the sign of a Main Character--only serves to add more weight to this argument.

From there it was a simple matter of nailing down the Throughlines and the deep thematics issues and problems at the heart of each. Standout features were Sefton's Influence Character Problem of Inaction--his cool, aloof, you-can't-ruffle-my-feathers attitude is the exact thing that challenges the group to reconsider who they think is behind it all. And the Relationship Story Throughline Problem of Evaluation and eventual Solution of Reevaluation perfectly encapsulates the relationship between Sefton and the other men. They think him guilty in the beginning and then reevaluate his status as potential war hero in the end. This last notion also services nicely as an example of the Main Character Solution of Potentiality.

Finally, when Dramatica predicts an Influence Character Unique Ability and Influence Character Critical Flaw that so closely matches the original film that you could have sworn the program actually wrote the screenplay, you can't help but think this is the right storyform.1 The Influence Character's Unique Ability is the unique quality of that character to influence the Main Character to change his or her point-of-view. The storyform we landed on predicted Appraisal for his Unique Ability, and this matches up with what you will find in the film. Sefton always has something to say about someone that sets him apart from everyone else. When everyone else is fawning over the arrival of Lt. Dunbar (Don Taylor), Sefton is the first to call him out on his silver spoon pedigree.

But it is the Influence Character Critical Flaw that Dramatica calls out that really steals the show. The theory predicted Repulsion to be the quality of character that lessens Sefton's ability to influence the men to change their mind about him. And that pretty much describes Sefton through and through. He is a repulsive person--someone who constantly pushes people away and refuses to get close to any of them. As soon as we saw that element in play, we knew we had the right storyform.

Deciphering the storyform for a particular work and seeing all the pieces fall into place is a fun and gratifying experience. It is like being able to read the codex of our interactions with one another--almost like Neo and his ability to see the the Matrix. A greater understanding of story always follows and an even greater appreciation for the wonder of the mechanism of narrative our minds thrive on.

The Dramatica Users Group meeting meets on the second Tuesday of every month. We try to vary the genres every time--next month is Kingsman: The Secret Service, last month was Kramer vs. Kramer, and in a couple of months we will be taking a look at Ex Machina. Everyone is invited--veteran or newbie--and we hope to see you soon.r

Previous ←
The Master Storyteller Method
→ Next
The Throughlines of Stalag 17