The Four Throughlines provide an opportunity for the Author to communicate his or her point-of-view on the best way to approach solving problems. Rather than thinking of them as "storylines" or individual characters, if you see them for what they really are--four separate perspectives--their purpose shines clear.

With all four perspectives accounted for, an Audience member accepts the narrative without the doubt and trepidation that accompanies half-baked arguments.

Stories About a Relationship

They may share concerns about the relationship, but We ourselves share our own private concerns. They may worry about what Satine and Christian may become, but we struggle about claiming exclusive rights to one another. They may express concern over Lucy and George's budding romance, but we encounter conflict surrounding finding something uniquely ours.

They may see our relationship in a particular light, but we ourselves experience it very differently.

The Throughlines of Jane Eyre

Charlotte Brontë's novel Jane Eyre and the film adaptation by Cary Fukunaga1 focus attention on the relationship between the two principals: Jane Eyre (Mia Wasikowska) and Rochester (Michael Fassbender). Everyone expresses their concern over the romance developing between them: Lady Blanche Ingram for whom Rochester intends to marry, Richard Mason who reveals Rochester's marriage to Mason's sister Bertha, and eventually Bertha herself. Their various Manners of Thinking set the stage for the Objective Story Throughline.

Yet, it is the Activities Jane and Rochester engage in that define the edges of the Relationship Story Throughline. The physical experience of being in the relationship, the passion and illicit conjugations, sit front and center within that We perspective. By juxtaposing these two points-of-view on the same relationship, objective plural and subjective plural, an Author develops greater more comprehensive understanding within the minds of their Audience. 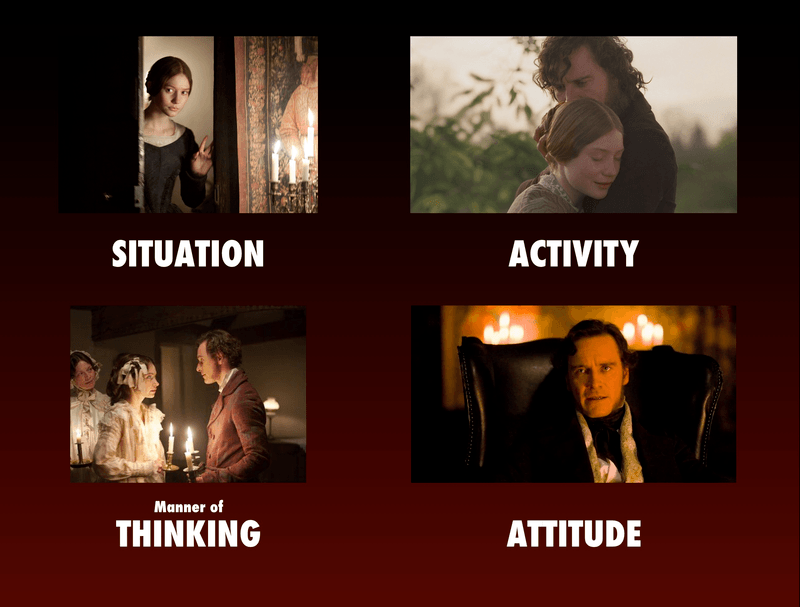 The Throughlines of Jane Eyre

As the focal point of the Main Character Throughline, Jane suffers through various Situations that lock her down throughout her life. An abusive aunt, trapped in a room with her dead uncle, the Lowood School for Girls (more abuse), governess at Thornfield Hall--all instances of conflict bred from untenable situations.

Finally, Rochester himself--a veritable force of nature driven by untold rage and anger--acts as the Influence Character upon Jane's Main Character. His Fixed Attitude and brooding demeanor challenge Jane to rise above any setbacks and determine for herself what she truly wants and desires.

A Form for Romance

Many romance narratives position the Four Throughlines this way--with the Objective Story Throughline in Psychology, or Manner of Thinking, and the Relationship Story Throughline itself in Activities. The various objective dysfunctions surrounding the development of a new relationship balance out nicely against the subjective concerns of possessing one another both in and out of bed.